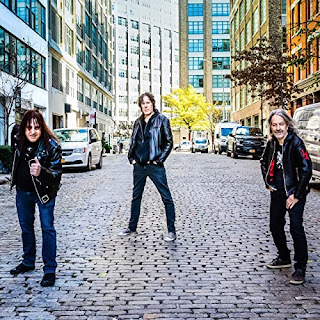 Yeah, that’s right: we’ve got ourselves a brand new Dictators tune! “God Damn New York”, the first new Dictators song in 20 years, features three-quarters of the band’s original lineup (Andy Shernoff on vocals and bass, Ross the Boss on lead guitar, and Scott Kempner on guitar) along with Albert Bouchard (Blue Öyster Cult, Brain Surgeons) on drums. And as you’d expect after a two decade absence, the mighty Dictators have come roaring back with a bona fide anthem! “God Damn New York” is both a love letter to New York and a lamentation on how corporations and billionaire scum have brought ruin to so much of what once made this beloved city so great. I put this song at the same level as more recent Dictators classics like “Who Will Save Rock ‘N’ Roll?” and “Avenue A”. Andy Shernoff has written another perfect song, which absolutely blasts thanks to mixing by the legendary Ed Stasium. This is one of the greatest bands ever in top form. Hail the mighty Dictators!