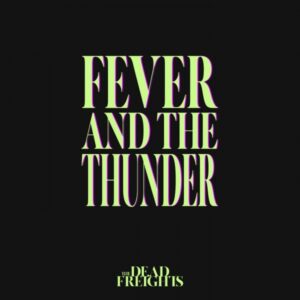 The Dead Freights – Fever and the Thunder

If you haven’t heard of The Dead Freights now is the time to change that. Fever and the Thunder is the fourth single from the Southampton quartet and, released earlier this week, is already a last minute entry to my top singles of the year.

Fever and the Thunder is the perfect trifecta of single material – sexy, sleazy rock and roll with louche verses, an infectious chorus and the kind of evocative lyrics you hear far too rarely in guitar music.

Singer Charlie James has just the right combination of prettiness and grit to his vocals to compliment the raw, but chart-friendly sound of the music.

The seesaw between the mid-tempo verses and the energetic choruses is delicious. However, the highlight of the track comes three quarters of the way through where it winds down into a slow drawl with James purring something tantalising about ‘the tail between your legs around my neck’ before it all goes clattering back into the energetic climax of the song.

Along with one of the best Instagram bios I’ve seen in a while (‘Putting the ABBA in Black Sabbath’) drummer Louis Duarte describes the track as ‘going to the grungiest Disco places we have ever been’ saying that ‘the four to the floor (ish) beat in the chorus, like it or not, is definitely inspired by John Travolta’s hips’. Well, what’s not to like about that?

I’m not sure if Disco-Grunge is a recognised sub-genre yet, but either way I want to hear more of it.

The post The Dead Freights: Fever and the Thunder – single review appeared first on Louder Than War.