The Countrymen “Flare-Up!!” on Audio Adventures 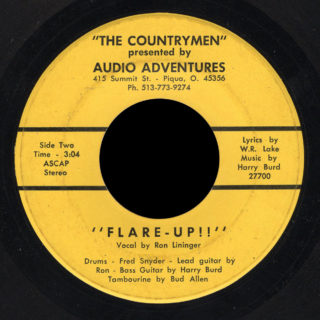 The Countrymen recorded on Audio Adventures out of Piqua, Ohio, 20 miles north of Dayton in 1971. They were really a country act, but “Flare-Up!!” is a crude and bizarre song, and does sound like it was recorded in a garage.

Are you ready girls?

Now there’s times I’m sorry,
You can bet your bippy,
That I ever decided to marry a long-haired hippie.

Well I like to eat,
And hold down a job,
You’d rather eat and drink and live like a slob.

I think we’re about to have a flare-up,
Let’s not have another flare-up.

If you dress like a girl,
Maybe put up your hair,
I’m sure that we could avoid another flare-up.

If you’d only wake up,
And do a little clean-up
We might avoid another flare-up.

When I need a little loving,
Tender loving care,
All I ever see is your long, black, and greasy hair.

I think we’re about to have a flare-up,
Let’s not have another flare-up.

The lyrics are basically sung twice, separated by a break where the drummer & tambourine keep the beat while Ron slides the pick down the strings. 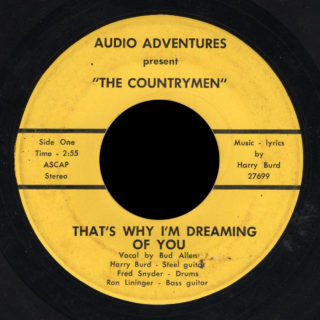 Anyone have a photo of the group?

More from OhioMore posts in Ohio »