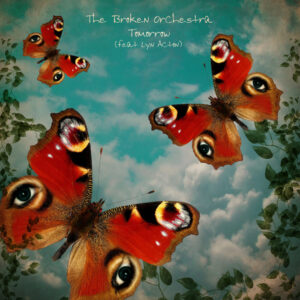 With impeccable timing, The Broken Orchestra return with a transcendent hymn to hope. Like the perfect Bond theme that never was, Tomorrow is a track that sweeps, soars and drips with soul. Gordon Rutherford reviews for Louder Than War.

There is always tomorrow, right? This week began with a rare message of hope for the nation. Whilst their track record has been far from impressive, the Government have now laid down a pathway out of lockdown. Perhaps there is a glimmer of light at the end of the tunnel after all.

Last year, for this very publication, I reviewed The Broken Orchestra’s single, Someone Just Pressed Pause. At the time, I described it as “a moving, sublime and poetic response to the horrific virus that is affecting us all”. With impeccable timing, given that they could have had no idea of the Government announcement, they are set to drop their latest single this week, and it’s an absolute hymn to hope. Once again, they have perfectly captured the zeitgeist.

At its core, The Broken Orchestra comprise Carl Conway Davis and Pat Dooner. They are the foundation and they lean on a plethora of outstanding collaborators to create their output. Tomorrow, a track that effectively tells two stories, sees them join forces with fellow Hull-based musician, lyricist and vocalist Lyn Acton (Pearl’s Cab Ride). The story behind Tomorrow is incredibly affecting and is best explained by Acton’s moving words: “Tomorrow was written during lockdown, inspired by a painting that a friend did when my son died, called ‘A Life Interrupted’. The song explores grief but draws parallels to the feelings of isolation and loneliness of these strange times. Always tomorrow for a better day.”

Musically, it does precisely what The Broken Orchestra have become so adept at. It is a form of laid back, trippy soul, continuing in the direction set by their brilliant 2019 album, Pathways. It opens with an atmospheric piano and Acton’s rich vocal, before the beats drop in and take it on. It grows and swells, sweeping cinematically. Just over halfway through we have the introduction of a heavenly horn that augments the feel wonderfully. Holistically, Tomorrow feels like the Bond theme that never was, but probably should be. As for Acton’s vocal, it’s an incredibly understated performance. She serves the tune superbly, never becoming overly melodramatic, despite the majesty of the music or the intensity of her lyrics. This is probably a bizarre comparison, but Acton’s vocal on Tomorrow sounds like a cross between Adele and The XX’s Romy Madley Croft. Her voice is mellow, soulful and melodic and it’s one that I could listen to all day.

To conclude, Tomorrow is the perfect journey from hopelessness to a better day. And that’s precisely what we all need to feel right now.

The Broken Orchestra can be found online here. They can also be found on Twitter.

You can pre-order Tomorrow at Bandcamp.