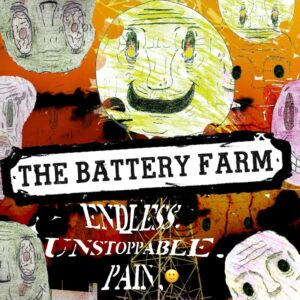 The Battery Farm unleash this furious EP on the back of the excellent Maggot Line featured here. fastly becoming one of the best new bands stirring the pot on the Manchester scene at the moment. Wayne AF Carey gets his ears syringed by the raw power…

There’s a storm brewing that’s threatening to batter down the hatches of our closed venues, reclaim the stages and fuck shit up again. The Corry brothers have already been building up a heady lightning bolt before lockdown, getting attention on our grass root underground scene with some incendiary shows which I just missed out on before the shit hit the fan. This four track thriller displays the kind of power you will need to witness when we get back to some kind of normal. As the band are described: “It’s a four track dive into the psyche and worldview of its creators; a record by four millennials attempting to come to terms with the terrifying uncertainty of the future they face, trying to make sense of the corruption, destruction and madness of this world and lashing out at the kleptocratic structures that have destroyed our planet and our souls.”

Maggot Line is just a pure fun thrilled yet dark Ramones stomp as I described in the last review. A short sharp shock with no clever bollocks. Then they get clever with Excellent Public Speaker. It’s fuckin’ brilliant and reminds me a slight bit of A Network Betrayal by Cabbage. That bassline just crushes in with heavy as fuck guitars, spoken word and furious vocals topping off a sandwich of raging punk grunge.

A Little Nothing Man sounds sinister and builds into another raging number with a tribal drumbeat that flies into a rage of vocals and furious noise. “What happens to us when we die” Fuck me! While The Black Smoke Rise is a proper nod to Dub Sex with a heavy feel. It’s that cunning bassline shrouded with more furious white noise guitar and Ben Corrie’s vitriolic Manc vocals. Mark Hoyle (Dub Sex vocalist) will love this fucker! It’s a bit of an ode to Swerve that goes hardcore mental in the closing minute. Stunning. One of the best releases I’ve heard this year.