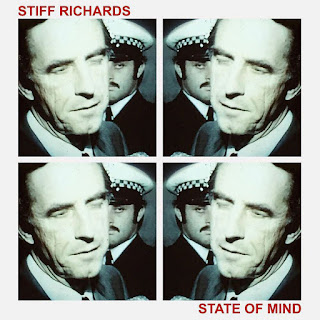 While I was a bit late to the party on the latest album from Stiff Richards, I’m just in time to discuss the European release of State of Mind on the illustrious and ever-dependable Drunken Sailor Records. It’s hard to believe that it was two years ago already that I raved about this Aussie outfit’s previous effort Dig. I wasn’t quite sure what to make of State of Mind upon first listen. It’s quite a considerable progression from the straight-up aggressive garage punk of Dig. But in recent weeks, it’s been one of my go-to LPs. On State of Mind, Stiff Richards have taken their sound to a whole other level without sacrificing any of the energy and grit of their previous output. The tunes punch as hard as ever, but these guys have made a quantum leap in the songwriting department. Comparisons to classic Aussie punk rock bands of the late ’70s and early ’80s are not unwarranted, but all in all Stiff Richards have fashioned a sound that is entirely their own. Think old school punk rock with a modern garage punk edge. At a lean nine tracks, State of Mind gets in and out before you even know what hit you. The band sounds fantastic, with Lochie Cavigan and Raf Heale in particular forming one of the most remarkable punk rock rhythm sections of recent memory. And there are few singers out there who can holler as righteously and ragingly as Wolfgang Buckley. The dude is a force of nature! From the scathing opener “Point of You” to the positively boiling “Talk” to the ripping closer “Fill In The Blanks”, Stiff Richards have turned out a batch of new punk rock classics. The vinyl for this Euro press is extremely limited – you know what to do!
-L.R.
https://drunkensailorrecords.bandcamp.com/album/state-of-mind-lp
https://www.drunkensailorrecords.co.uk/products/687829-stiff-richards-state-of-mind-lp-drunken-sailor-records-drunkensailor-134
https://www.facebook.com/DrunkenSailorRecords
https://stiffrichards.bandcamp.com/album/state-of-mind
https://www.facebook.com/stiffrichardsband/