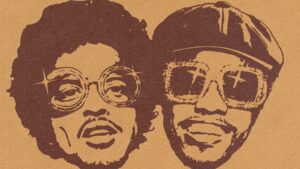 Bruno and Paak announced the Silk Sonic project last week. “We made an album!!” enthused Paak on Instagram. “Y’all get the first song next Friday 3/5!! Rocket emojis and all that!!!”

Silk Sonic brought out two songs on Friday 5 March – ‘Silk Sonic Intro’ and ‘Leave the Door Open’. 70s funk legend Bootsy Collins has also contributed to the duo’s new album, which answers the question of how the two have managed to create such an authentic sound.

There’s a mix of old school r&b and early 2000s r&b within the tracks. The smoothness comies from the 70s old school, and the vocals remind me of early Usher and Ne-Yo – that sexy, smooth, yet effortless r&b vibe. The harmonies between Paak and Mars are spot on – both artists compliment each other incredibly well. This isn’t the first time Paak and Mars have worked together; Paak opened for Mars as part of the 24K Magic tour in 2017. 24k Magic (2016) was Mars’ last album, and a sensational one at that, winning the triple crown at the 2018 Grammys.

‘Silk Sonic Intro’, is a perfect 60-second taster of what’s to come with the album, a motown feel, big brass instruments, soft jazz, smooth soul and a sensual RnB sound – very much like ‘Leave the Door Open’. ‘Leave the Door Open’ is a smooth 70s r&b bedroom classic, which will entice you to leave your door open at the possibility of Mars or Paak coming in to serenade you with some soft and sensual RnB.

Listen to ‘Leave the Door Open’ by Silk Sonic here: