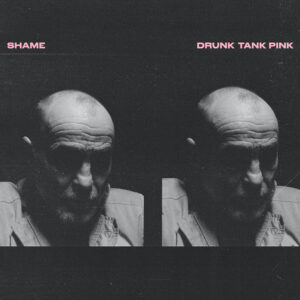 In the current post-punk revival the UK finds itself in with acts like Fontaines D.C. and The Murder Capital, Shame remain one of the most intriguing bands. While their first album, Songs of Praise, was far from revelatory – boasting a tried-and-true guitar rock sound – it had a certain spark to it that more than established them as a band to watch. Their new album, Drunk Tank Pink, more than confirms the existence of that spark. It’s a stronger album in almost every way, expanding the band’s colour palette and inviting in a wider array of influences, bringing to mind everyone from Talking Heads to Peter Gabriel.

At first, it’s a little jarring. Shame’s sound has changed so much that it almost feels as though the band has been rebuilt from the ground up. But, while Songs of Praise often felt like a collection of early singles, like many debut albums normally do, Drunk Tank Pink never feels like anything less than a fully realised vision. On it, the band have grown in just about every conceivable way.

As musicians, all the members have grown a lot more adventurous. Charlie Forbes’ drumming, in particular, is fantastic, acting as the essential glue that holds these songs together, while the band’s duelling guitarists have become experts at wrangling unusual noises out of their instruments. They’ve also brought in a number of new sounds to add extra touches of colour – from the peppy handclaps on Nigel Hitter to the piano-ballad outro of Station Wagon. Everything just feels more vibrant.

Similarly, Charlie Steen’s voice has become a much more versatile weapon, frequently switching between low baritone growls and David Byrne-like yelps, often in the same song. His lyrics are stronger too, with more nuance and an emphasis on mood over overt politics.

The first half of Drunk Tank Pink is filled with the album’s more buoyant and poppy songs. Opener Alphabet acts as a starter pistol with its driving drumbeat and chugging guitar riffs. There’s also March Day – which almost brings to mind The Clash’s Should I Stay Or Should I Go? with its call-and-response vocals – and the borderline groovy Nigel Hitter.

However, it’s in its second half that the album really hits its stride, with the songs adopting a heavier, almost goth-rock tone.

Snow Day, which serves as the album’s centrepiece, is without a doubt the best song that Shame have recorded so far. It’s a large, multi-phase track that contorts and changes rapidly, while moving in a linear fashion. It does a great job of highlighting how far the band have come – every member is on top form here – and hints at where they could go next. Human, for a Minute is another highlight: a slow, trudging love song that calls to mind Joy Division and early The Cure. Then there’s the closer, Station Wagon, which wraps up the album in a suitably eruptive way.

Despite how strong Shame’s debut was, Drunk Tank Pink manages to improve on it in just about every way. The songwriting is more adventurous, the musicianship better and in general there’s just a lot more variety. It’s the type of album that, even after several listens, feels like it still has so much more to it yet to be uncovered.

You can find Shame online here.