Sam Lambeth: The King (You And Me) – single review 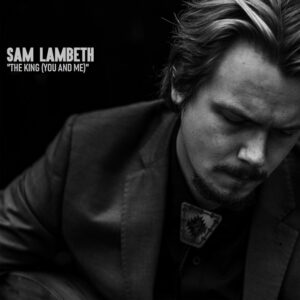 The King (You And Me)

Birmingham songwriter Sam Lambeth returns with his new self-released single The King (You And Me).

The King (You And Me) finds Sam taking further control of his musical direction after decades of fronting bands. It’s a confessional walk through the loss of love and the everyman self-questioning that goes with it. It’s the fountain that gives and gives for many a songwriter and he draws again on this well. His style is one of a breezy radio-friendly Americana pop that rises in the middle of the song to shoot for the masses. There are shades of Ryan Adams, touches of Sam Fender, and surging choruses that should get the people, when we can, singing along arm in arm.

It opens as a more heart-on-his-sleeve confessional, a recognition of his own faults, his voice husky and plaintive. The music drops back on the bridge, where he really nods to Adams in his musical phrasing. The song comes up and glides effortlessly into his rallying chorus, balancing the two desires of the song, the added keyboard backing the track, played by Zoe Brittle, a nice underlying touch.

With this new single, and his previous, Lambeth seems to have settled into and found his new voice, one in which he is confident within his own skin. The King (You And Me) shows it off well and we look forward to hearing more from him.

The post Sam Lambeth: The King (You And Me) – single review appeared first on Louder Than War.