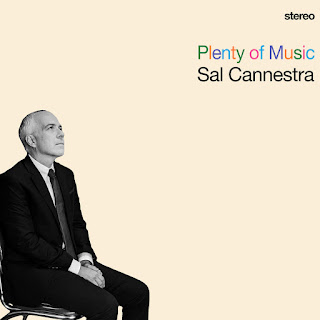 After fully embracing his sensitive singer/songwriter side on his proper solo debut Easiest Thing To Do in 2017, Sal Cannestra vowed that “the next one will rock”. And on the Pete Donnelly produced Plenty of Music, this New York indie rock and roll lifer delivers on his promise. Cannestra (Sleeper/Serpico, The Gerunds) was most recently heard fronting The Thirteen, a terrific Philly-based pop/rock and roll outfit that released albums in 2008 and 2013. For this particular release, Cannestra recruited a whole bunch of talented friends. Donnelly, in addition to producing, plays bass and keyboards. Peter Santa Maria (The Thirteen, Jukebox Zeros), Jim Balga (Blockhouses), TJ Quatrone (Hurricane Kate, Sleeper/Serpico), and Jason Victor (Dream Syndicate, Matthew Sweet, Skull Practitioners) are also featured players. Here Cannestra explores a great mix of the musical styles he’s been associated with over the past quarter century plus. He tries everything from power pop to indie/alternative rock to ballads to poppy punk. I would describe this overall as a good, honest rock and roll record. If you liked The Thirteen’s Lift-Off!, you will almost certainly find Plenty of Music to be a logical progression from that album. Songs like “Daisy and Dani”, “The Heart Of It”, and “A Little Dumb, A Little Cruel” are punchy pop songs with smart lyrics and great hooks. With its vivid imagery and memorable refrain, “All This Will Be A Park Someday” just might be Cannestra’s crowning songwriting achievement. Elsewhere, tender love songs (“By Any Other Name”), kick-ass rockers (“Listen Up”), and epic ballads (“Soft Sunrise”) fall perfectly into place.

Plenty of Music manages to be both a satisfying rock record and a quintessential singer/songwriter effort. Cannestra assembled a dream team of backing players, and this album has got the oomph of full band rock and roll. But the songs themselves leave plenty of space for Cannestra to tell stories, impart wisdom, and reflect on his life. If you’ve never heard of Sal Cannestra before, Plenty Of Music will tell you a lot about who he is. All money he makes from this release will be donated to the Center for the Integration and Advancement of New Americans.