Releasing an album at the start of a global pandemic isn’t exactly ideal, but it’s the situation Enter Shikari were faced with when their grandiose sixth LP Nothing Is True & Everything Is Possible was unveiled this April. What followed should have been a victory lap around the globe, playing hundreds of shows, celebrating their highest-ever UK album chart position. Instead, they’ve been forced to sit on the sidelines, watching the COVID crisis unfold further, dismantling anything vaguely resembling a plan. Here, frontman Rou Reynolds reflects on what should have been a banner year for Shikari, and why it could have been spelled the end of the band…

How did it feel releasing your album at such an uncertain time?
​“It was right at the beginning of lockdown, so it was very odd. We released an album that got our highest chart position, the biggest album of our career, just as the world was going to shit. It was such a strange cocktail of emotions. There was a lot of guilt involved: here we were making art and celebrating our biggest achievement while everything around us was crumbling.”

Did you ever think about delaying the release?
​“It was tempting from a strictly-commercial standpoint, but it was almost a philosophical decision. In times of adversity, we all rely on music to some degree, to help us either escape or find perspective or warmth or to hear reassurance. For us, it felt like a bad idea to let music dry up when we’re going through the most hardship as people than we have for years.

“I’m not making us out to be charitable, like, ​‘We had to go ahead because the people wanted it,’ but there was a selfish nature to it; you’re like a kid at Christmas before releasing an album, you can’t wait to see the response and how it connects with people. To put a halt to that didn’t bear thinking about either, as we’re of the generation that wants everything now and wants validation now (laughs). I think we made the right decision because it’s gone on all year, there hasn’t been an opportune moment to release an album, this year as a whole has been difficult for any artist.”

The album was written pre-COVID and is full of socio-political commentary. Do you think its message could come to represent 2020?
​“The stuff about possibility, how ridiculous was that? We make an album that essentially looks at existential threats, the real catastrophic events for humanity – the common dreads that we’ve always been speaking about, but with a degree of clarity we haven’t achieved before. We release it and we have a global pandemic, which is an existential threat, like many of the other ones we’ve sort-of ignored. Neoliberalism has led us down this path where it’s all about profit. In the UK we shut down a lot of our infection-based laboratories, so we’ve had to quickly put up these lighthouse laboratories, quick half-baked measures to increase our technical and scientific capacity. The same in America, Trump shut down Project PREDICT, which would have been so helpful for the virus. Now here we are at a pandemic where the U.S. and the UK are two of the worst performing countries by any metric, and it’s so frustrating at the lack of preparation. I guess there are a lot of lyrics on the album that have become even more meaningful and prescient, but I was just as ignorant as everyone. I wasn’t listening to the epidemiologists and the virologists that were warning us, it’s just lucky that this was a relatively almost-benign pandemic, really. If this was an avian flu with a 60 per cent death rate, that would be a civilisational disaster, and that’s a complete possibility. This was a dress rehearsal for what will eventually come and we’ve dramatically failed. It’s just whether we learn from that or not.”

You’ve not played a show for over a year now. How have you coped with that?
​“Essentially we’ve experienced the death of Enter Shikari to some degree. I was watching Muppets Christmas Carol the other day and how Scrooge gets to see the past, present and future, and it’s been a bit like that. We haven’t died, but we’re just sitting here watching and reminiscing on what has happened. Certainly near the beginning of the pandemic it was like, ​‘Are we ever going to play again? What’s going to happen?’ I like to think when we get to play shows again there’s going to be such a level of gratitude for what we do. Regardless of how conscious and noble you want to be about it, halfway through a three-month tour you do start to take it for granted and forget what an amazing thing this is that you’re able to do. I hope now that we’ve been starved of that connection, starved of playing together and having those moments of all four of us acting as one with the audience, I’m hoping that I’ll never take it for granted again.” 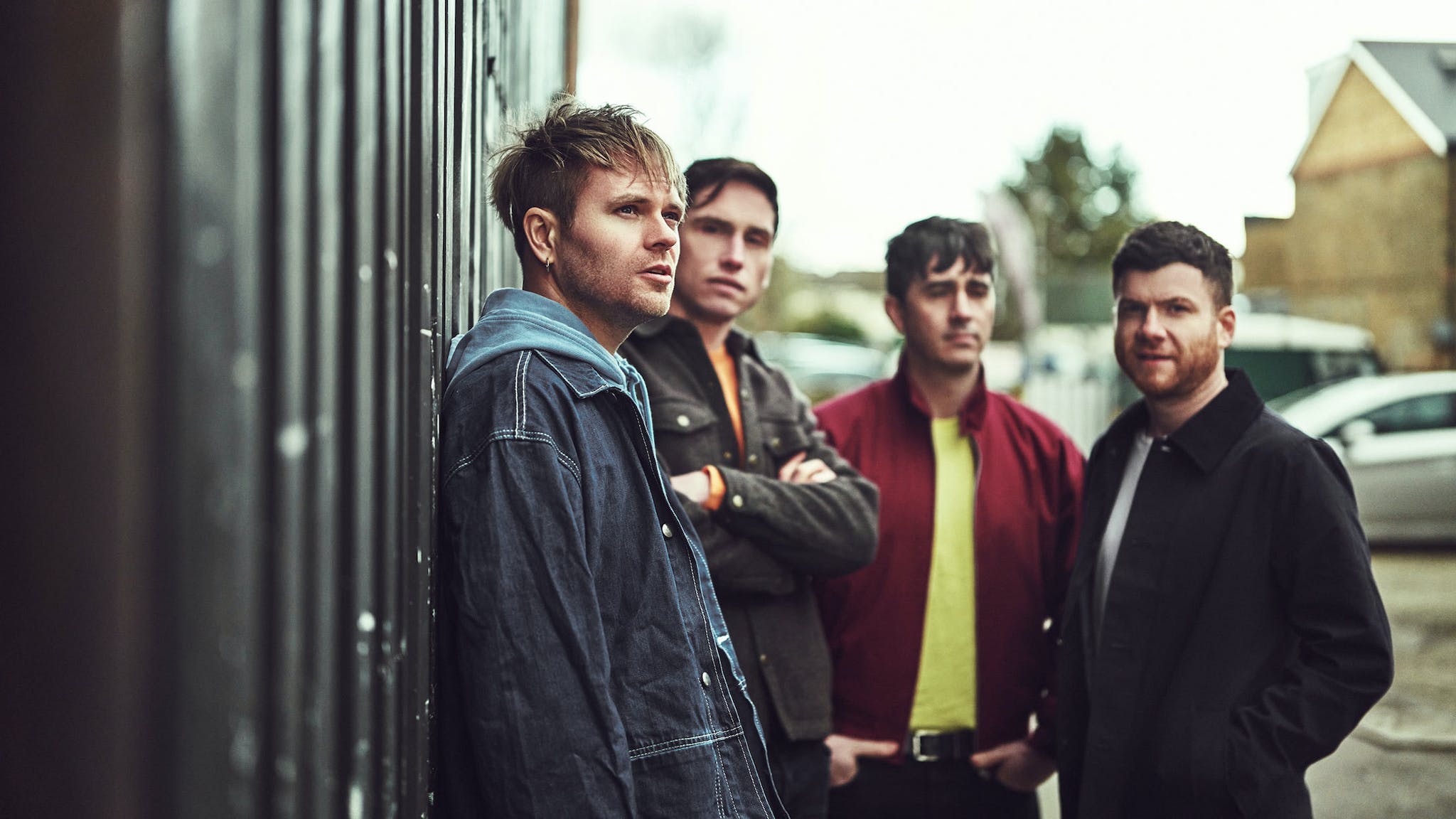 Why haven’t you guys done a livestream?
​“I think some of them have been incredible, I like the way it enables a band to put more narrative into the shows, but for me, the excitement waned pretty quickly. We batted ideas around, but we don’t like doing what everyone else is doing. And it’s a cliché answer, but it’s not a live show is it? Without that connection it would make me sadder, more than anything. It would be amazing to be in a big room playing our music together with our crew, that would be brilliant, but that’s quite a quaint, romanticised, in-jokey way of looking at it. There’d be a sense of awe if we were in a big place, but it would soon turn to ash because you don’t hear the crowd or see the passion in people’s eyes. It’d be like going through a photo album your ex, knowing that you can’t have it again (laughs). It would make me a bit depressed.”

We hear that you’ve been using this period of quiet to write a third book.
​“It’s a companion guide to Nothing Is True, but it’s an actual book. I remember getting a review once that criticised us for not saying enough: ​‘Here’s another lefty-political band, pseudo-intellectual stuff, they say these slogans but have nothing to back it up,’ that sort of thing. So I was like, ​‘Okay, I’m going to back it up.’ This is an exploration through philosophy, anthropology, social psychology – all the things that influenced the album. Think of it not an analysis of the lyrics, and more an analysis of the world that the lyrics were written in. There are precise criticisms and ideas for how we can change. It uses the lyrics from Nothing Is True… as a signpost route through the research and ideas. It blossomed into something much more than I expected and has consequently taken up the whole of the year.”

Have you managed to write any music during this downtime?
​“I have not written one thing this year, which the more I keep saying it, the more it frightens me to be honest. Every time I’ve sat down to write, I haven’t been able to. I haven’t even had the zest, the urge. From when I got my first guitar, I’d be writing music in my head all the time, it’s like a tap and occasionally I pop along with a bucket and get some of it out. But I’ve not had that at all. Whether that’s because I’ve had the book… but I think it’s more of the general situation, I don’t know what to do. I don’t feel inspired to write at the moment. I haven’t felt creative at all. I’ve been looking around and feeling sick. I hope it’s just a blip, or it is the death of the band (laughs).”

What have you learned about yourself this year?
​“I’ve learned to what degree myself or my ego is made up of Rou from Enter Shikari. Like I said, I’ve experienced the death of the band, so that part of my life has disappeared – it’s been reduced to going on Twitter and clinging on to being Rou from Enter Shikari (laughs). That’s where it lives, in that domain. That’s been really difficult at points, not speaking to passionate people, people who are as passionate about our music as I am. Not having that outlet has been pretty difficult. In many ways it’s been nice to experience a year that has taken all that away because I’ve learned what a massive part of me that is, my inner-world gets so much happiness from it. Not just standing onstage communicating to people through music, but those one-to-one conversations with people about our music, other people’s music – those moments where you meet human beings. A lot of that has been taken away so I feel a bigger appreciation and realised it’s something I very much live for.”