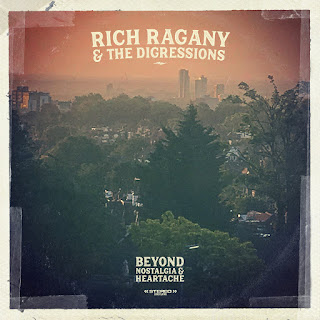 Album #2 from London-based rock and roll band Rich Ragany And The Digressions is, as expected, absolutely brilliant. Beyond Nostalgia & Heartache follows up 2018’s remarkable debut …Like We’ll Never Make It. While Ragany (Role Models, The Loyalties) originally assembled this band to back him as a solo artist, things quickly changed once all of these individuals started playing together and clicked in a special way. This is a true band — and one of the best ones out there!

Ragany is quick to acknowledge that Beyond Nostalgia & Heartache is a group effort in every way. It’s an album which highlights both the individuals players’ unique talents and the band’s undeniable chemistry as a unit. The full band is Ragany on vocals and guitar, Kit Swing (Mallory Knox, Seven Days and Doesn’t Die) on vocals and guitar, Gaff (Glitterati and Dedwardians) on lead guitar, Ricky McGuire (UK Subs, The Men They Couldn’t Hang) on bass, Simon Maxwell (Role Models, The Loyalties) on drums, and longtime Role Models producer Andy Brook on keyboards. According to Ragany, the theme of the album is “finding strength and celebrating life throughout heartbreak and loss — the cyclical renewal in life.” That’s a remarkably relatable concept in the year 2021. These 12 songs (several of which were co-written by Gaff and/or Brook) are collectively about surviving the rough times and finding the light even when darkness prevails. By no means has Ragany left his power pop instincts fully behind. Songs like “Heartbreakers Don’t Try”, “Marionette”, and “Blackout Til Tuesday” will hook you with knockout choruses and warm, inviting melodies. But overall the strength of this record (and this band) is that it transcends genre and allows Ragany to pursue ideas that may have never worked until he had a band as formidable as The Digressions behind him. This is an album that flows seamlessly from cinematic rockers to gentle ballads to jangly pop tunes to country and folk tinged numbers to boozy pop-rock anthems. There are some obvious standout tracks (“Sometimes We Can Hear The Voices” is the kind of album opener that some bands spend their careers aspiring to write), but the real beauty of Beyond Nostalgia & Heartache is the way it flows as an entire album. I’d be hard-pressed to name a single song here that isn’t utterly fantastic. And you just won’t hear music with more heart and soul than this.
Far from an escape from life’s woes, Beyond Nostalgia & Heartache is an album that faces them head-on and still finds hope and triumph. Put this record on while you’re taking a long walk or sitting outside with a cold beverage and reflecting on your existence. It’s album worthy of being fully experienced — just like life itself.
-L.R.
https://richraganyandthedigressions.bandcamp.com/album/beyond-nostalgia-heartache
https://www.facebook.com/richraganyandthedigressions/