Remembering the worst-ever performance of Sweet Child O’ Mine, at the Super Bowl halftime show

The Super Bowl halftime show is one of the most-watched musical performances on the planet. It’s a place where only the greatest (or at least biggest) artists are allowed to strut their stuff while big burly blokes drink Gatorade in a nearby dressing room, shouting words like ​“Scrimmage” and ​“The longest yard”.

In 2011, it was the turn of The Black Eyed Peas, coming a few months after the mixed-reception to their sixth album The Beginning. Following in the footsteps of The Who, Bruce Springsteen and Tom Petty in the three years prior, the LA hip-hop collective had the opportunity to sprinkle some bombastic sometimes-political pop bangers over the end zone. But, because it’s the Super Bowl, they needed some rock’n’roll too.

And who do you call when you need an instant injection of guitar-slaying badassery into your set? Mr. Slash Slashington.

Let’s get one thing out of the way early: what happened next was not Slash’s fault. By 2011, he must have played Sweet Child O’ Mine live thousands and thousands of times. He can do it in his sleep, upside-down, with his guitar behind his head. Cut him and he bleeds ​‘whoa-oh-oh​’s.

Similarly, it’s not strictly Fergie’s fault just how much of a car crash this duet is, but it’s certainly not her finest moment.

It starts with the punctuation-abusing will.i.am, complete with titanium hairdo, shouting the word ​“Beats!” over the top of that iconic guitar intro for seemingly no reason. Down below, glowing green bodies float around the pitch, resembling Mr. Burns coming out of the woods, before the swarming crowd converges at the lip of the stage and start putting their hands in the air like they just don’t ruddy care – because, y’know, this is RAWK music. This is what rock fans do. We hear a riff and instantly start pogoing with both arms aloft for the duration of the song. That is our duty. 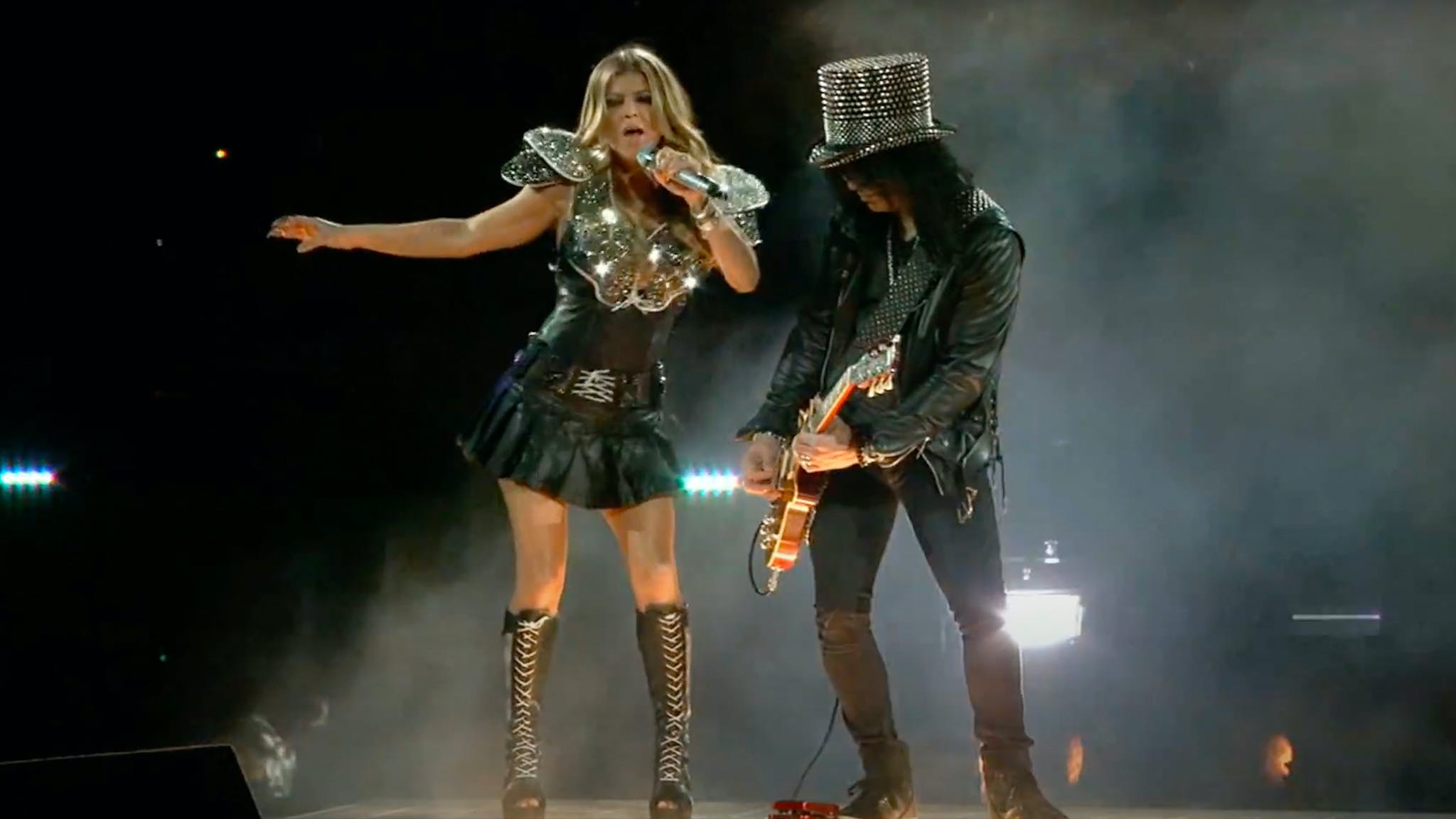 Seconds later and Slash arrives on the scene, rising from the stage in a circle of dry ice, sporting a jewel-encrusted hat that matches Fergie’s shoulder pads. And then it happens. Sounding like a bad impression of Axl Rose with food in his mouth, the Black Eyed Peas singer nails the performance with all the accuracy of a drunk toddler with a fire hose. It’s awkward, it’s cringey, it’s… just bad.

Cast your eyes to the right, and we see one of the Black Eyed Peas trying to dance so loud that nobody can hear the music, while William I Am presumably scrolls through Twitter, or emails his agent about this hot new TV show called The Voice.

Back on The Rock And Roll For Life™ stage, Fergie dances around the GN’R legend, whipping her hair back and forth, trying to shake herself awake from this feverish nightmare. And as we mercifully come to the solo, will.i.am starts his yelping again because he takes personal offence to the sound of just a guitar playing.

Thankfully, it ends there, but the damage had been done. This was the third song in an eight-song setlist, which Rolling Stone described as the worst Super Bowl halftime show of all time.

Coincidentally, five years later in 2016, Fergie would depart The Black Eyed Peas and Slash would rejoin Guns N’ Roses, where he’s been belting out this classic all over the world alongside Axl, who has so far resisted the urge to don some diamanté shoulder pads.

Understandably, the whole performance hasn’t been posted online, but you can watch the 90-second clip of Sweet Child O’ Mine below. Poor Slash.