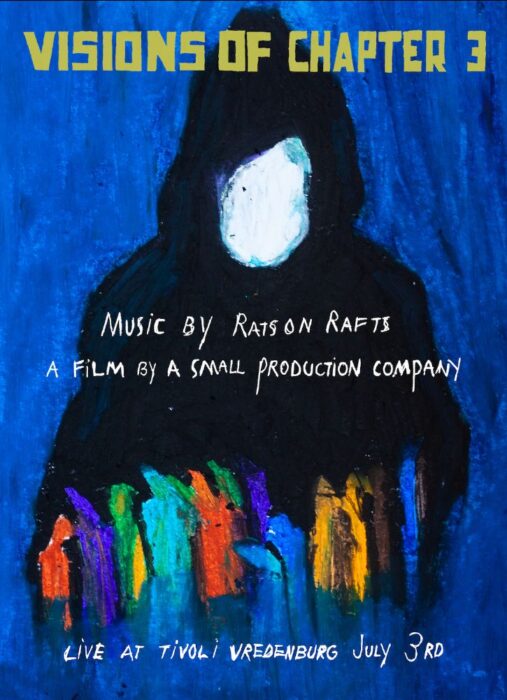 With the release of their conceptual album Excerpts From Chapter 3: The Mind Runs A Net Of Rabbit Paths, Rats on Rafts affirmed their affection for modernist aesthetics. A telltale with an alienated narrator, the record is interwoven with references to the artier pages of 1982 and 1969. Hex Enduction Hour by the Fall and wonderful yet puzzling An Electric Storm by White Noise, respectively. The recent interdisciplinary initiative – Visions of Chapter 3 – sums up the artistic endeavours of Rats on Rafts in the film which centres on the band performing the album in full.

The project was created in collaboration with A Small Production Company who also made the band’s most stunning music videos. Although initially tagged as “interdisciplinary film”, the work might remind of an absurdist television play such as Alan Schneider’s staged version of Samuel Beckett’s Waiting for Godot. Based on the storytelling concept, the album is transformed into a script, while the imageries and metaphors of the music are translated into the language of choreography and props.

The powerful intro on A Trail of Wind and Fire seems to compete with the forces of nature (and not only those mentioned in the title). Hence, the ocean’s currents, infiltrating the video texture of the band’s live performance. Similarly, this gradually developing whirlpool of sound ostensibly defies the oppressive power – that of time and state. The gypsum mask, placed above the stage to the left, looks as if it was a depiction of Kronos, the Greek god of fate, justice and evil. On the right side, the all-seeing eye or the Eye of Providence is alert to act when it’s needed. The interplay of visual elements creates a postmodern spectacle akin to Anton Corbijn’s illustrious video take on Joy Division’s Atmosphere. The hooded figures in black cloaks walk in circles on the dimly-lit dance floor, performing rituals of vague nature which, perhaps, is known only to the production crew.

The boundaries between the physical and intangible are blurred by illusionistic means. The dreamy texture of Rats on Rafts’ music on Where is My Dream is converted in a corporeal form with a theatrical smoke effect, coating the stage in the cloud of purple haze. It hocuses one and then suddenly breaks into cascading riffs of post-punk rage.

Certainly visuals and theatrical elements extend the meaning clad in the music. Yet they are also a major distraction. The striking qualities of Excerpts From Chapter 3 – frenetic rhythmic patterns and persistent bass riff leading through a maelstrom of distortion combined with 60s psychedelia – are veiled by the layers of meanings and tinsel. Thus, the sound feels slightly more unassuming. Overlooking the abundance of visuals, one might appreciate the music which possesses a beguiling quality.

The next screening of Visuals of Chapter 3 is scheduled for the 24th of July. The tickets are available here.

All words by Irina Shtreis. More writing by Irina can be found in her author’s archive.

The post Rats on Rafts: Visions of Chapter 3 – film review appeared first on Louder Than War.