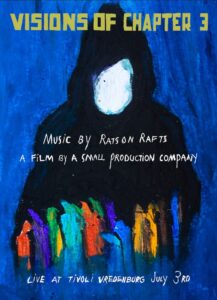 Rats On Rafts have today announced tour dates for the summer and, in the UK, December. They have also revealed an extended version of their song Tokyo Music Experience, with a cover of Pere Ubu’s Visions Of The Moon on the flipside, and details of a new interdisciplinary film project of their latest album, Excerpts From Chapter 3: The Mind Runs A Net Of Rabbit Paths.

The band released their latest album at the start of the year and we described it as “a stylised and stylish modern drama that reveals intricate characters and drama that hooks you and keeps you absorbed throughout.” Also on July 3rd, they’ll be premiering their interdisciplinary music Visions Of Chapter 3, combining film, visuals, theatre and dance with Rats On Rafts performing the album in its entirety. A Small Production Company who were responsible for the band’s recent music videos will be directing it. Tickets for the performance are available here.

Talking about the concept of the performance, the band have highlighted the fact that over the last 18 months, such online shows can result in shorter tension curves, caused by the lack of interaction between band and audience. For this reason, Rats On Rafts are planning a show that they say will transcend the regular live stream to create an exploration of recognisable themes such as loneliness and escapism. An unrecognisable protagonist will take viewers on a journey through the many landscapes of the psychedelic post-punk album.

Today, the band have also released a new extended version of their song Tokyo Music Experience. We premiered the video for the original song last year and after being included on the Pere Ubu Datapanik TV channel, the band were invited to lay down a cover version. For that, they chose Visions Of The Moon, which is included as the b-side to this release. Listen to the two tracks below. They are available now on various platforms here.