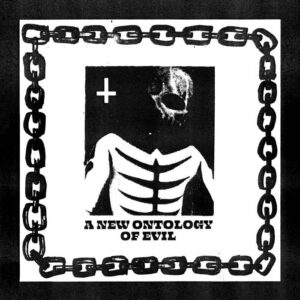 Manchester’s Primitive Knot are back again with an obscenely heavy new album full of riffs, sludge and dark spirituality. Andy Brown gives A New Ontology Of Evil a listen for Louder Than War.

If you’ve been reading my Louder Than War reviews then you may already be familiar with the one-man, riff-making behemoth that is Primitive Knot. For the uninitiated, A New Ontology Of Evil will serve as a particularly brutal and curmudgeonly introduction to the work of the ever-mysterious Jim Knot. Knot always has a number of wonderfully esoteric projects on the go: from his recent electro-industrial album as SV8 to collaborations with Joan Pope, Meghan Wood and The Wyrding Module. Primitive Knot blends industrial-metal, noise-rock and sludgy riffs into a deliciously heavy sonic stew.

Knot’s music often explores themes of power while simultaneously pushing the music to be as bludgeoning as possible. It was only back in February that Primitive Knot was channelling political anxiety and dystopian dread into something extremely heavy yet hopeful with the excellent Fight The Future. A New Ontology Of Evil takes things in a far murkier direction; exploring power, death and philosophy with a near-religious fervour. A typically uncompromising exploration into the nature of evil itself. If the Cenobites in Hellraiser had headphones on then I’m pretty sure they’d be listening to this.

A monstrously heavy riff rips through the silence and we’re unceremoniously thrown head-first into the dark brutalism of Neolithic. I close my eyes and I can almost picture the apes in Kubrick’s 2001: A Space Odyssey gathered in awe around the black monolith, “stone and earth/ stars and sun”. The title track comes next; a gargantuan monument to noise and the power of a heavily distorted riff. “Despised/ taboo” intones Knot in hypnotic, half-spoken tones, “reviled/ unbidden”. Echoing the deliberately simplistic language of early Swans albums; Knot uses words to paint a bleak yet incredibly potent image.

Knot’s trusty Roland drum machine is working overtime on the driving Leviathan; the track’s repetitive and highly effective riff flattening everything in its path. The onslaught continues unabated with Of Death; a ferocious and relentless dive into the abyss. Intense primordial doom. It feels like we’ve reached the dark heart of the album as Knot chants, “powerless/powerless”. Fear, hopelessness and existential dread never sounded so good. Crucified then proceeds to drag us even further down into the depths with 6 oppressively atmospheric minutes of slow, sludge-metal riffs and wailing feedback. I haven’t heard anything this magnificently dark since I last listened to Khanate.

Liminal Erotica greets us with 5 minutes of noise; a wall of static that acts as a strangely mediative breathing space between the albums many riffs. The utterly immense Goddess, Destroyer throws us straight back into the fire with snarling bass and some superbly sleazy riff-worship. The track feels like blissful surrender: accepting your fate as you bow down to the goddess of cosmic noise. Black Leather Lips is a huge, devil horns aloft rock track featuring some wonderfully satisfying guitar tones from Knot. The guitar work is distinctive and dominant throughout the album; vicious riffs complimented by some brilliantly addictive and catchy lead.

A remix of Black Leather Lips by Salford Electronics brings the album to a close by dragging us into some dungeon-based club with a punishing electro-industrial banger. A New Ontology Of Evil is a dark, twisted and thoroughly evil trip into the void. While industrial-metal acts like Godflesh are certainly a big influence, Primitive Knot remains a law unto itself.