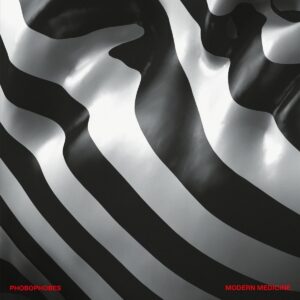 From the minute Phobophobes second album, Modern Medicine, opens, we know we are not in for the most comfortable of rides.

Broodingly pulling us in with low vocals, and contemplative lyrics, opener Hollow Body Boy starts off evoking the likes of Arab Strap and ends up descending into a swirl of paranoia.  For those already familiar with Phobophobes after their debut album was released in 2018, we know that paranoia is indeed not unexplored territory for them, and the modern age has certainly provided further fertile breeding ground for this sense of foreboding to expand. Though recorded before the Covid pandemic, the age of Brexit and Trump (from the outset lyrics like “if you’re going to build a wall, can you build it around yourself” make the targets of the ire quite apparent) underpin it enough in themselves for it to feel suitable for this most strange and unpredictable of times.

But we aren’t just talking about some “nervous tension” post-punk style, or doom-laden goth (even though these do play have their own roles to play in the album.) What it actually merges into from here is something far harder to pigeonhole. With twirling organs that sound like they should be emanating from a vaguely malevolent Big Top, the circus that they then pull us into sways effortlessly from squelching funk vibes to sweeping atmospherics. Jamie Bardolph Taylor’s voice is also a natural vessel of drama; the perfect ringmaster for the walls of sound around it. The production – which like their 2018 debut Miniature World-  is also at the hands of Killing Joke’s Youth – matches the level of command the compositions require perfectly, with a full and evolved sound.

Recent single I Mean It All sits in the midst of it all, following, to some extent, some of the rules of the pop ballad form, before ripping them up (in slow, mournful, melodramatic style.) A “tale of new love dying in its prime by a colossal event,” it’s a love song from the age in which we all wince in dread whenever we see a “breaking news” headline. By the time closer Give Them A Body, which shuffles in and expands outwards into the perfect closer, we feel like we’ve been put through a real run of drama. With a label change and personal circumstances, this was the album that almost didn’t happen. We should be very glad that it did.

More info on Modern Sky releases can be found on their website.

All words by Amy Britton. Find more on her archive.