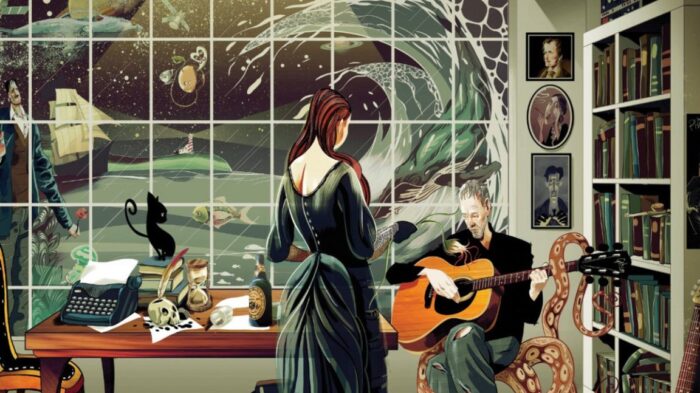 ‘Mental Home Recordings’ is the second solo album from singer-songwriter Philip Parfitt. Having previously made his name in the 80s with alt-rockers, The Perfect Disaster, his latest offering is a far cry from his Velvet Underground-influenced former band, with the rawness in sound now replaced by a rawness of feeling. After their demise, Parfitt now under the name Oedipussy produced 1994’s sublime ‘Divan’. A slick record, it soared, purred, and pulsated with lush rhythms and sexy grooves. Parfitt duly disappeared, shunning the music industry, and relocated to an old mill in France. Critically, though, he never stopped writing and twenty years later in 2014, out of the bleu, he re-emerged with is solo debut; the self-released ‘I’m Not the Man I Used to Be’. Organic and honest, it came very much from the soul and saw a wiser, gentler Philip Parfitt come back into the fray. It was a very welcome and surprising extension to what has been a long musical journey for Parfitt.

Six years on, the new album picks up from where his solo debut left off. Parfitt plays a plethora of instruments, aside from his trademark acoustic guitar and is again joined by his recent sidekick, Alex Creepy Mojo, on guitar. Amongst a number of other collaborators, notably, are ex-Perfect Disaster band mates Jon Mattock (drums) and John Saltwell (bass) making brief guest appearances. The album itself is a very personal record. Its title mostly likely refers to back when Parfitt worked as psychiatric nurse in a Victorian asylum (a theme he previously visited on his former band’s album, ‘Asylum Road’). It’s a time of his life that appears to have made a deep impression on him. As the first wisps of ‘Somebody Called Me In’ sweep from the speakers, it’s clear Parfitt has been tapping into a rich musical seam of melancholic melodies and gentle beauty which instantly draw you in. Second up is the cinematic ‘All Fucked Up’, arguably, the LP’s stand-out track. It provides the perfect backdrop for Parfitt’s story-telling and effortless reflections, evoking images of locos and milk tankers clickety-clacking down the track into the distance, before bursting into the biggest chorus on the album. It’s the sound of Parfitt fully embracing the sonic possibilities of home-recording, while coming-of-age as a solo artist. Ironically, he’s anything but fucked it up and if this track doesn’t move you, then nothing will.

The mournful ‘If I Wake Up’ shows that Parfitt is no slouch when it comes to penning a touching lyric either. As the song unfolds, he delivers the track’s killer couplet in his trademark, world-weary voice; “If I wake up and you’re gone, it won’t be wrong”. As the final chapter of a fading relationship closes to a lilting brass accompaniment, you could, for a moment, be forgiven for thinking you were listening to Lou Reed’s ‘Berlin’ album. It really is that moving. ‘Don‘t Wait (Until I Am Dead Before You Tell Me That You Love Me)’ continues in a similar, if not more up-beat, vein, as it glows like the final embers of an autumn bonfire. ‘John Clare’ is one of the album’s more penetrable songs, lyrically. An ode to the English poet known for his celebrations of the English countryside evocatively floats over the repetitive chord sequence and back-ground drones. ‘I Saw There Beside Me’ with its ‘up’ vibe is reminiscent of the quieter moments of Parfitt’s former band, The Perfect Disaster, and would have sat comfortably on their third album, ‘Up’. There’s also a subtle nod to the Velvet Underground’s ‘Sunday Morning’ too, both in melody and rhythm. Meanwhile, the warm and effortless tremolo strum of ‘Bones Cold’ brings-to-mind Sheffield songsmith Richard Hawley after its dreamy verse melody breaks out into one of the album’s sweetest choruses.

However, the album’s pièce de résistance is still to arrive though. It duly does in the shape of the penultimate track, ‘Are We Really Still the Same?’, a spaghetti-western style lullaby. Perfectly complimented by Parfitt’s whistled chorus line, the song is pure genius and the album’s hairs-on-the back-of-your-neck moment. Somewhere out there, there’s a cult flick with that scene where a lonesome cowboy slowly rides out into the wilderness waiting to be sound tracked by this truly wonderful song. And there’s still time for the warm throb of ‘Of Nothing in Particular’ to bring the album to a close in a similar fashion to which it started.

So, there we have it. Philip Parfitt’s second solo album. It has been a long time coming, but, for sure, it has been worth the wait. Far from being mental, it’s a life affirming and very human album. If you are a fan of Lou Reed, the Velvet Underground and Leonard Cohen, make sure you seek it out and this masterfully crafted album will soon steal a place in your heart.

A couple of promo vids: