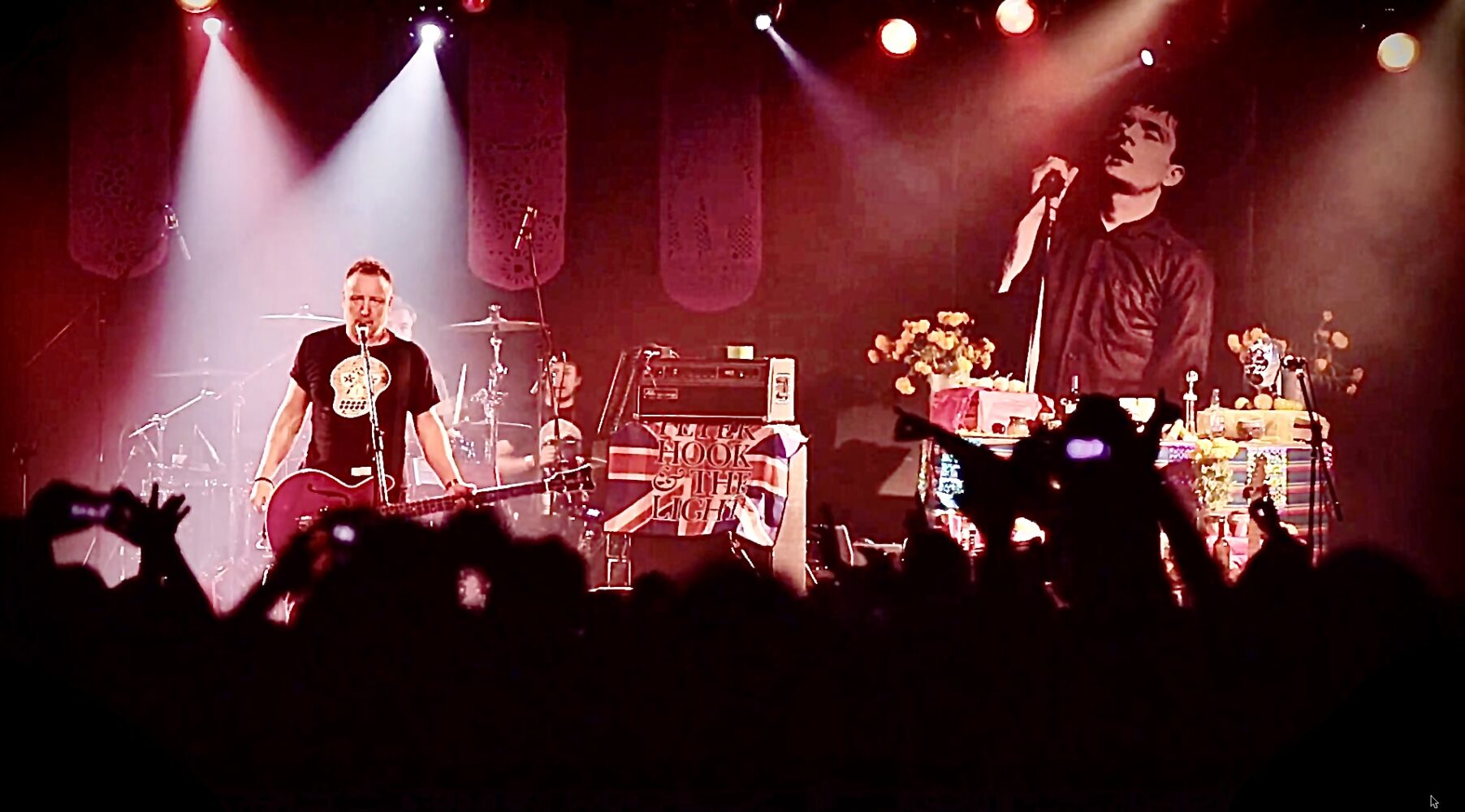 Sure, it’s strange to be seeing live shows solely from the spaces of our own living rooms, but performances like these offer us a chance to celebrate the music we love in a moment where time and space are temporarily suspended. Yes, reader, Hooky transported us all back to Mexico City on November 2, 2014, for some Joy Division revelry during Día de los Muertos.

Who wouldn’t want to escape the confines of a global pandemic to hear both Joy Division albums in their entirety? The special “live” concert streaming event last night of Peter Hook & The Light’s Live in Mexico City gave isolated fans what they wanted.

The show opens with a photographic image of Ian Curtis on the stage, an ofrenda just below him full of colour and spark. Translated literally as an “offering,” the ofrenda is an altar to the dead. As the portrait appeared on my television, I thought of Kevin Cummins’ gorgeous limited edition book Ian Curtis: Memento Mori, a collection of photographs that capture the many and varied objects—offerings, as it were—left on Ian Curtis’s grave in Macclesfield. Yet those objects are steeped in mourning, trappings of a material world imbued with loss and anxiety over the fragility of human existence. Hooky’s show does something different. If Cummins’ book serves as one kind of memorial to Ian Curtis, published for the 40th anniversary of the singer’s passing, Peter Hook’s Mexico City concert acts as a compliment, a flip-side kind of commemoration.

Unlike rituals of lamentation that occur at gravesites, Día de los Muertos, or Day of the Dead, is a life-affirming celebration. The centerpiece ofrenda on Hooky’s stage isn’t a tombstone at which to grieve, but rather a luminously constructed place at which to conjure the spirit of the dead, just briefly, into the joyous realm of the living. And in the course of the show, the viewer comes to realize that the entire stage itself mirrors the construction of an altar, an ofrenda, strung with papel picado along the back and adorned with marigolds, calaveras, and dazzling guitars that sparkle under the stage lights. Instead of offering traditional food for the deceased, the band on the stage-like altar becomes the sustenance to welcome Curtis back for just a little while. In this way, as Hooky sings some of the lyrics to the Joy Division songs Curtis wrote, his voice gives aliment and offers a path into the gratifying raucousness of the material world: “This is the way, step inside . . .”

Yet celebrating the dead with mirth and revelry can also be marked by melancholy, especially when a loss is more recent, immediate. Hooky opens the Mexico City concert with “Atmosphere,” dedicating the song to Michael Shamberg, who had passed away just a day prior on November 1, 2014 after a long illness. Shamberg headed up Of Factory New York, the American Factory Records arm at 325 Spring Street in New York City. Shamberg produced some of the incredible New Order music videos for “Blue Monday” and “True Faith,” and helped connect the band with film directors like Kathryn Bigelow and Jonathan Demme.

The show circles back quickly to the sheer pleasure that emanates from the music of Joy Division. The gig is smashing, and it’s obvious to anyone watching that Hooky is having such a good time playing and singing these songs. After opening with “Atmosphere,” the audience gets to hear “Digital” before the band moves into playing the tracks of Closer and Unknown Pleasures in their entirety. Hooky even plays the melodica on “Decades.” After the last track of Unknown Pleasures, the audience gets four more songs: “Dead Souls,” “Ceremony,” and “Transmission,” ending, of course, with “Love Will Tear Us Apart.” During “Ceremony,” the camera cuts ever-so-briefly to Pottsy smiling as he plays guitar. Several close-up shots of Jack’s bass could just as easily be images of Hooky, expertly playing those iconic bass lines.

For most of the gig, we—as viewers in the 2021 present—feel present. The sounds rock our living rooms, and we wish we had bigger television screens to watch the show (am I right?). But there are also key moments where we realize we’ve been transported in time and space. As “Love Will Tear Us Apart” starts to close the performance, the audience in Mexico City begins a fútbol-style chant to the notes and beats of the song, humming along as if they’re rooting for a win.

It’s tough to make a really good concert film, and I appreciate that this one wasn’t designed to compete with works like Stop Making Sense. I loved how the filmmaker brought viewers across the world to the show, and gave us what felt like a live and immediate performance. Yet I did find myself longing for more experimentation and variation. When “Twenty Four Hours” started, I enjoyed how the quick visual cuts were nearly in line with—but ever-so-slightly distinct from—the fast beats of the song, reflecting the strangeness of any idea of “permanence” in a space designed for fleeting performance. I’d have liked to have seen more attention to the interplay between sound and vision in the show. Of course, it’s all subjective, but if I’d have directed the film, I would have cut to the same colour-saturated shot of the Ian Curtis ofrenda that opened the film just after “Decades,” as Hooky finished singing aloud to the gone (yet ever-present) lead singer.

But let me just say, how about the fact that the show gives us all a chance to travel to Mexico City? I love CDMX, and I immediately ran a quick map search of the venue so I could engage in some imaginative travel. The Jose Cuervo Salon, where the gig took place, is just a stone’s throw from the Museo Soumaya, and a short walk from the studio and library of the famed Mexican muralist David Alfaro Siqueiros (the Sala de Arte Publico Siqueiros, in case you find yourself in the city at some point in the future). It’s also pretty close to Enrique Olvera’s restaurant Pujol, where we might all have gotten some amazing mole for dinner before the show. Ah, after the pandemic. After. In the after times.

“Live” streams like this one offer a glorious escape from the wretchedness of a pandemic life. I hope there will be more, but I also hope it’ll be safe to return to the actual spaces of live music sooner rather than later. In the meantime, I’m more than happy to be transported to Mexico City and to summon the spirit of Ian Curtis through the music of Joy Division. 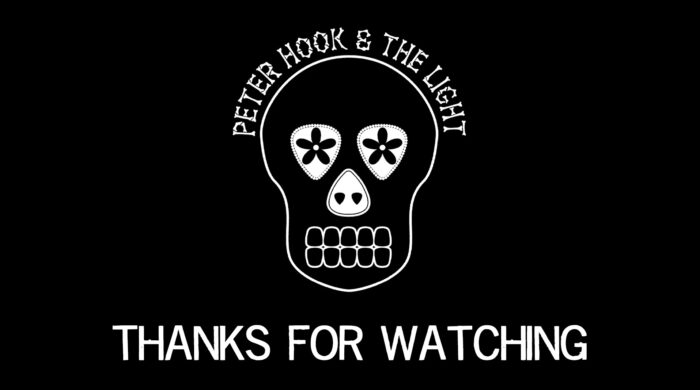 Screenshots grabbed by Audrey during the live concert stream of Peter Hook & The Light: Live in Mexico City.