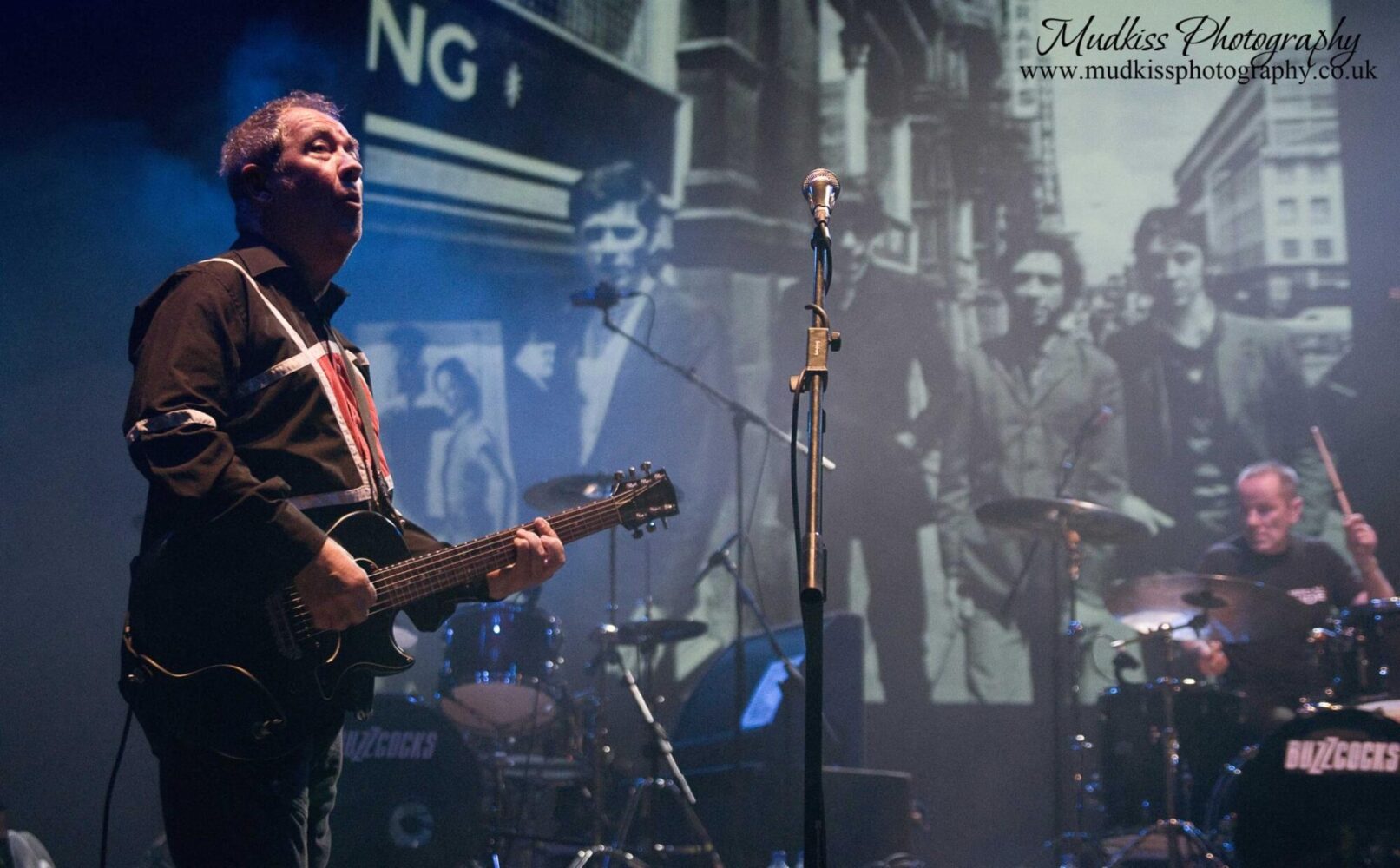 Coinciding with the second anniversary of his death on 6th December, the plaque was unveiled (Friday 4 December) on Pete’s childhood home, in landside, Pennington in Leigh. Following talks between the Pete Shelley Memorial Campaign and Wigan Council. 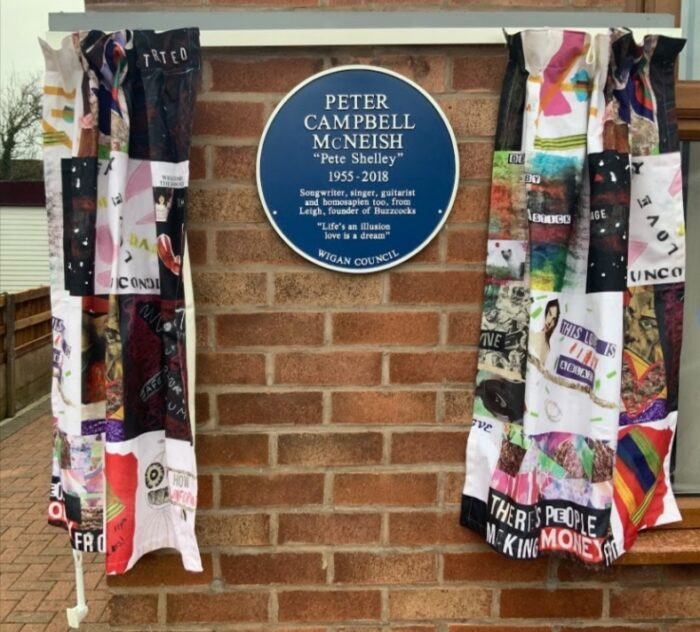 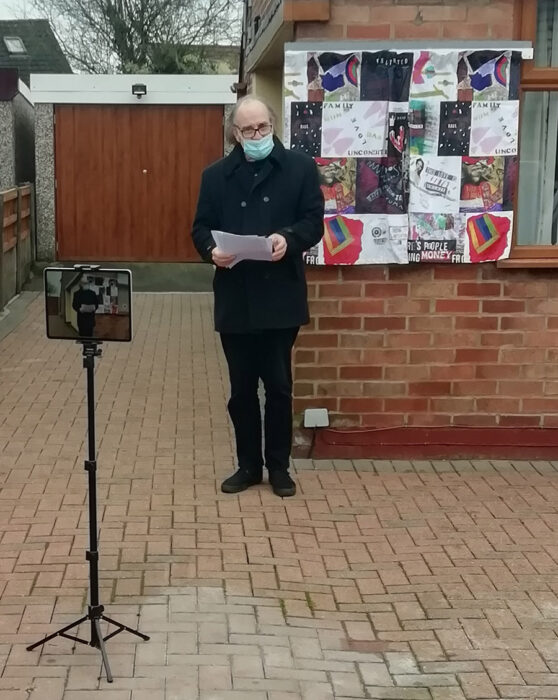 Leaders from Wigan Council, along with members of The Pete Shelley Memorial Campaign, and representatives of Pete’s family attended the ceremony, Graphic designer Malcolm Garrett MBE who produced work for Buzzcocks, Duran Duran, Simple Minds and others, unveiled the plaque.

Malcolm said “ Pete Shelley and Buzzcocks played a major, pivotal role in an evolving landscape of music and youth culture, not only here in Greater Manchester, but the world over. Its an honour to be invited alongside members of Pete’s family to unveil this plaque in the memory of a unique and wonderful Homosapien. It is a fitting tribute then to recognise him with this modest blue disc, we hope it will serve as a visible inspiration to all those who follow him, that greatness is so often borne of modest beginnings.”

But this plaque, on the house in which he grew up, is of course just one step towards creating another permanent memorial here in Leigh, Wigan. The ambition is also to establish a foundation in his name to support education in music and writing in the Wigan and Leigh area, and I look forward to working closely with the Memorial Campaign and the Turnpike to realise that ambition. Let’s not shed any more tears, but let’s just fall in love with Pete all over again”.

Paul spoke with the owner of 24 Landside Mr Cannon today. ” I saw Pete locally often, walking about with his guitar, and often saw him walking backwards and forwards to school.” He knows what Pete went on to achieve and he’s very happy for Pete’s plaque to be displayed, he said these things are very important for the town and the community, and Pete deserves this. He also said, he’s more of a blues fan and is himself a fan of Georgie Fame, another Leigh born musical hero who had several big hits during the 70s, he also said he’s looking forward to seeing all the tourists turning up to see Pete’s plaque.

The unveiling of the plaque has been recorded on film and will feature as part of a celebration video of Pete’s life which will include speeches from colleagues, friends and family including Steve Diggle, Steve Garvey, Johnny Marr, Tim Burgess, Clint Boon, Marc Riley, John Cooper Clarke and many more.

The full video can be seen here

The Pete Shelley Memorial Campaign are a community not for profit fundraising collective made up from fans of Pete Shelley. The campaign group were formed in December 2018 following the passing of Peter Campbell McNeish with the intention to raise funds for a permanent memorial of Pete in his hometown.

An album of covers of Pete’s songs has been released today, Yesterday’s Not Here No More – The Genius Of Pete Shelley, Re-Imagined is an affectionate tribute to the late Pete Shelley, featuring 25 artists, on Not Murdered Records, all the proceeds are going to the Pete Shelley memorial campaign, you can buy the album here:

Paul Lally founder of the Pete Shelley Memorial Campaign said “ we believe that Pete’s legacy needs to live on as he is an exemplary example of your typical working-class lad, done good. From his humble beginnings born to working-class parents in Milton Street, Leigh he showed us what can be achieved from nothing, Pete clearly is an inspiration and areas like this need to honour its iconic figures, it gives youth in this area something to aspire to”.

Since its formation the Pete Shelley Memorial Campaign have raised just under £12,000 by hosting fundraising events locally, the campaign were also involved in the incredibly successful understated exhibition curated by Malcolm Garrett than ran for 6 weeks at the Turnpike in Leigh back in November 2019. The campaign have also been responsible in the development of the blue plaque, through ongoing partnership working with Wigan Council.

Long term the campaign hope to register as a foundation, The Pete Shelley Foundation. This will allow them to continue fundraising after the memorial has been achieved for the benefit of youth in the Borough helping them to follow their dreams, this will ensure Pete’s legacy continues for many years to come, and Pete’s family confirm this is something that Pete would have been proud to be involved with, as its exactly how Pete was, always wanting to help and support others.

The Pete Shelley Memorial Campaign is very much a work in progress and is open to everyone who wishes to become involved.

The campaign can be contacted by email at peteshelley.msc@gmail.com

Words and photos of the unveiling by Paul Lally