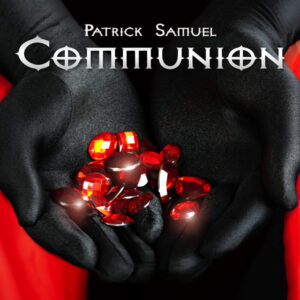 Patrick Samuel is a London-based artist, diagnosed with autism and ADHD, who considers himself an advocate for neurodiversity awareness. Communion is his third album, and his second for neurodivergent indie label Tiergarten Records. Communion continues the neo-goth path that he began to take on his Lost Shadows EP.

It’s a dark album that tackles the tough issues of today with song titles such as Dead Presidents, American Nazi, Zyklon B and White America. Musically it uses soundbites and dark grooves of menacing bass and drum, with the vocals low in the mix, like a whispering voice of outrage and dissent. There is use of repetitive chanting, which creates a hypnotic, mesmerising beat. There are, at times, hints of late Cure on songs like Beautiful Lies and Burn The Witch, and the lush arrangements of Dead Can Dance, as on Black Eden.

The album opens with a chant of ‘I can’t breathe’, and you know you are on a journey through the dark heart of, not just America, but the West. Ghost Land has a slow build, as though something ominous is coming towards us and Messiah has a smooth, laid back melancholic vibe, whilst A Whispering Forest is eerie and redolent of a Southern Gothic landscape. Flesh and Fantasy is sultry and seedy, whilst the title track, Communion, builds up to a frenzied beat. American Nazi has a drum beat opening that could be California Uber Alles before becoming a heavy thud with vocals like a crazed dictator. Zyklon B attacks the religious right and it ends with the industrial beat of White America.

There are many hints of old school goth here but plenty of new ideas too. Anyone interested in the dark side of music should take a listen.