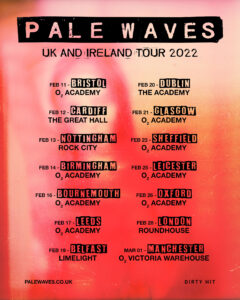 To give their fans something to look forward to, Pale Waves have announced a UK Tour in 2022, kicking off on 11 February in Bristol and culminating in a huge hometown show in Manchester on 1 March.

The national tour announcement comes ahead of the band’s highly anticipated second album, Who Am I?, which is set for release on 12 February via Dirty Hit. Who Am I? features the singles You Don’t Own Me, She’s My Religion, The album was recorded primarily in Los Angeles alongside producer Rich Costey before the Coronavirus lockdown forced the making of the album to go virtual. Singer Heather Baron-Gracie and drummer Ciara remained in LA and the rest of the band returned home to use the latest technology to record their individual parts in their bedrooms.

Pre-order Who Am I? here: http://dirtyh.it/whoami