Skip to content
NIGHTWISH keyboardist and main songwriter Tuomas Holopainen spoke to Kaaos TV about the upcoming comeback album from his long-running black metal project DARKWOODS MY BETHROTHED. Tentatively due before the end of the year, “Angel Of Carnage Unleashed” will be DARKWOODS MY BETHROTHED‘s first collection of new songs since the release of “Witch-Hunts”, which came out more than two decades ago.

Regarding how he and his DARKWOODS bandmates decided that now was the right time for the group to return, Tuomas said (as transcribed by BLABBERMOUTH.NET): “We did three albums in the mid-’90s, the latest one coming out in ’98; ‘Witch-Hunts’, it was called. And since then, we have had this high-school-friends get-together almost every summer, since the past 15 years or so, and we always talk about the comeback of DARKWOODS and then forget it immediately. The summer comes, we talk about it, ‘Now let’s do it,’ and then we forget about it. But last July, in 2020, we thought that it’s really now or never. Because of this situation that the world is in, we finally might have the time and the means to actually realize this that we have been talking about for so long. And here we are.”

According to Tuomas, the drums for “Angel Of Carnage Unleashed” were recorded in February at Petrax studios. “Then we spent a week in our place here in Kitee recording the guitars and the vocals,” he said. “And now it’s in the middle of the mixing process, to be finished in a couple of weeks.”

Holopainen went on to emphasize that DARKWOODS MY BETHROTHED has never been his band. “Originally I was just a session musician back in the days,” he explained. “And now, even though I’m a full-time member of the band, I still don’t do any songs; it’s the other guys who take care of that. I just play my parts with the keys… That’s the dynamics of this particular band, and that’s the way it works the best, because Jouni [‘Hallgrim’ Mikkonen, guitar], Teemu [‘Hexenmeister’ Kautonen, bass] and Pasi [‘Emperor Nattasett’ Kankkunen, vocals], the core of the band, they have such a strong vision of the songs and the lyrics and the overall atmosphere of what DARKWOODS is about. So they do the songwriting part, and then I just come in and spice up the whole thing with the keyboards, just the way it has worked in the past and on this album as well.”

Asked what his relationship to black metal is nowadays and whether he still listens to the genre at all, Tuomas said: “I don’t really listen to any kind of music anymore, for reasons I can’t really explain. But back in the days, in the mid-’90s, black metal was a huge thing for me for a short period of time. Bands like EMPEROR, ENSLAVED, DIMMU BORGIR and CRADLE OF FILTH. I don’t even know if these bands want to be called black metal, because that’s such a puritanic thing, but for me, I was highly influenced by that genre of music. And I still enjoy them a lot. But I just don’t listen to music at home that much. And also I don’t think that DARKWOODS MY BETHROTHED can be categorized solely as a black metal band. Musically, yes, but the lyrics are about something completely else.”

NIGHTWISH‘s two interactive “An Evening with Nightwish In a Virtual World” concert experiences will kick off the “Human. :II: Nature.” world tour this weekend. The band will perform in a tavern called “The Islanders Arms” built in a virtual world for two nights — Friday, May 28 and Saturday, May 29. On both nights, the fans will experience a one-and-a-half-hour performance, hearing songs live off the latest album, “Human. :II: Nature.”, for the first time ever. These two nights will have their own, slightly different setlists. 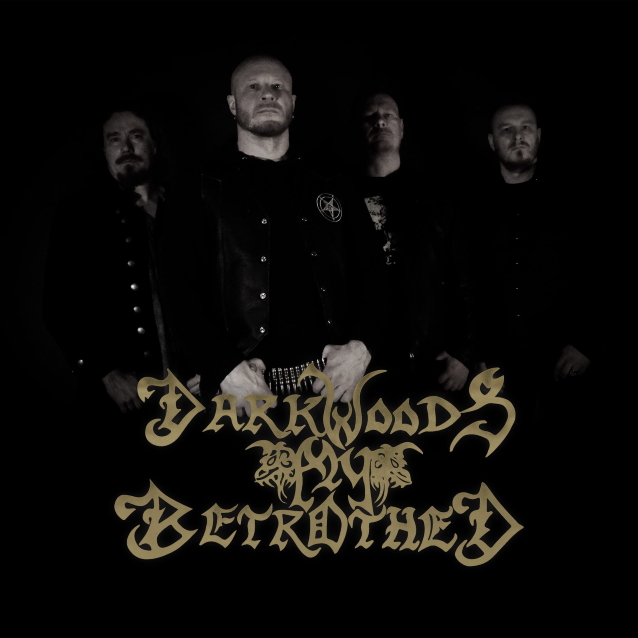