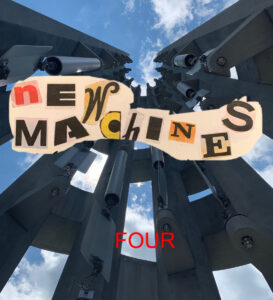 Hailing from Loveland, Ohio, New Machines are led by main man Eric Bair, and they have released three albums since 1999. However, this release is their first in 15 years. Not only that, but it’s the first time they’ve allowed someone outside of the band to produce them: Brian Nupp.

The single is called Four, but don’t let that confuse you, there are only two songs.

Fight Party starts with a big chord like Ziggy Stardust, but then jagged guitars kick in like a Television track, but with vocals more like Jonathan Richman (though not in the nasal sense) than Tom Verlaine. It’s a quirky, indie song, sounding like it’s coming from the kitchen or the bathroom at a college party, not the main room, and all the better for it. It has a post-punk 80’s vibe too, with a nice sax solo. It definitely gets into your head after a few listens.

You’re In Atlanta opens with a cool drum and bass line. It reminds me a bit of Joe Jackson, with its slightly world-weary city groove. It’s like a road trip: driving around thinking melancholic thoughts, feeling like a loser, wanting his lover back from Atlanta. It’s the loneliness of the indie rocker on a long night of songwriting.  Personally, I prefer You’re In Atlanta to Fight Party, though the latter is definitely more of a single.

Well worth checking out.

You can find New Machines on Bandcamp, Sonicbids and Facebook.