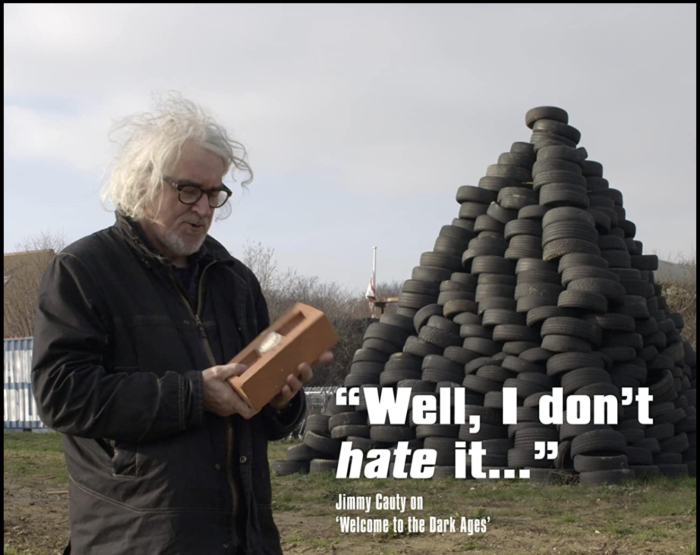 Welcome To The Dark Ages is the story of Bill Drummond and Jimmy Cauty, formerly known as The KLF, and their return after a 23-year moratorium.

KLF were the best selling act of the early ’90s who left the music industry in a hail of machine-gun fire at the ’94 Brit Awards, deleted their back catalogue and burned a million quid on the island of Jura off the coast of Scotland.

But KLF are no longer a pop group. They are now new age undertakers, building The People’s Pyramid, a monument built out of 34,952 bricks forged from the ashes of the dead and have made November 23rd in Liverpool ‘The Toxteth Day of the Dead.’

Paul Conroy (Under The Wire, A Private War)

Welcome To The Dark Ages begins in the 23rd century, in a post-apocalyptic wasteland which was once the Northern English city of Liverpool. In the district once known as Toxteth, a mysterious pyramid stands among demolished buildings. Returning to the late 20th century, we revisit the origins of the Justified Ancients of Mu Mu, The JAMs otherwise known as The KLF, who became the top-selling singles act in the world and then left the music business, burned £1M of their own money & signed a contract agreeing to a 23-year silence.

23 years later, in Liverpool, this silence ended at 23 seconds past midnight on the 23 August 2016.  On this day The KLF were no longer pop stars but had become undertakers and were planning to build a 23 foot high pyramid in Toxteth, Liverpool, made from bricks which would each contain 23 grams of a dead person’s ashes, proposed as a new British ritual for the commemoration of the dead.

The film follows the first year of this project, up to the first Toxteth Day of the Dead. We meet and interview the people who have brought their brick in the People’s Pyramid, from hardcore fans to an eight year old girl who convinces her dad to buy a brick for her and her 5 month year old sister.

The film includes Jarvis Cocker’s collaboration with The KLF on a cover of their hit Justified And Ancient, which has to date not been officially released anywhere.

When I attended the JAMs event, Welcome To The Dark Ages, in Liverpool in 2016, I became convinced a film needed to be made about their new incarnation as builders of the People’s Pyramid. The band hadn’t agreed to be filmed since the early 90s. But I persevered, and they eventually agreed. We started filming.

On Day Two they told me they were no longer interested in taking part in the film.

I just kept filming, and they allowed me to film anything I wanted as long as I didn’t ask them anything or try to make them do anything. When I showed the finished film to the JAMs, they asked me to destroy it. I disagreed with their judgment. Eventually, they came around to agreeing with me that the film should be released after all. So here it is.

The post New film about the KLF : watch the trailer and all details here! appeared first on Louder Than War.