Ben Barlow’s been growing his hair in lockdown. It’s sort of like a gauge of how long this has been going on for. He promises at least one gig will be played with it before he gets the chop. Much as we’d like to see him with a mane down to his arse, hopefully he’ll be in the barber’s chair before too long. If only because Neck Deep haven’t played anything from their latest album All Distortions Are Intentional live yet, and we’re busting to see it…

How have you been this year, Ben?
​“Yeah, fine. Tough time to be in a band, I think. But other than that, not too bad. Just been doing some stuff round the house, cooking a bunch, playing a lot of video games.”

What’s cooking?
​“Anything and everything. The last couple of weeks I haven’t gone full vegan but I’ve significantly reduced the amount of meat and dairy that we eat, so I’ve been doing a load of vegan stuff. Mexican, Asian, and standard boring British stuff. So that’s one good thing that’s come out of all of this – I’m a better cook than I was!”

You’ve been growing your hair out as well…
​“Just a bit, yeah! That’s been Project Number One, slowly watching that grow out. It’s a good marker of how far into lockdown we are! I’m waiting until I can play at least one show with it before I get it cut, then it might have to go. It’s nice, though, I think it’s looking pretty good. It’ll get in my mouth during shows, but that’s already started happening when I’m eating so I’m used to that anyway.”

You put out All Distortions Are Intentional earlier in the year – with everything else being shut down, did it feel good to actually have a band event still go off?
​“Yeah, it was good to have something to look forward to and work towards and have happen. It kept us in a good place having the buzz and the lead up to it, but then the fact that we couldn’t follow it up and have shows and stuff, for me, was tough. It was really strange, like: now what? But if we hadn’t released the record it would have been even more disheartening. But the release of the record has been the highlight of the year for us. Just a shame we couldn’t see it out properly.”

Fans totally got on it, though. Did that help make things feel a bit better?
​“Yeah! People seem to really like it, and I’ve had loads of messages from people saying, ​‘I really hated it at first, but I love it now.’ As time’s gone on that’s happened quite a bit, and loads of people loved it at the start anyway, and it charted in a really good position – Top Five – so I can’t complain. But for me, I just wish we could have played, because where you really feel the impact of a new record is when you play it live. So it feels like there’s a missing piece.”

There’s a different vibe to it – were you worried that people might not take to some of it?
​“Yes and no, really. We were so confident in it that we weren’t too worried. But whenever you release a record, I always think about the balance of progressing and doing what you know you’re good at. But we loved it, so that made us really confident – if we like it this much, fans should get it and like it. And if not, whatever, we like it! We’ve come to expect a certain amount of… hate is a strong word, but people not liking something, so we’re used to that – the people who want exactly what they want. But we’re super-proud, and that’s the bottom line for me.” 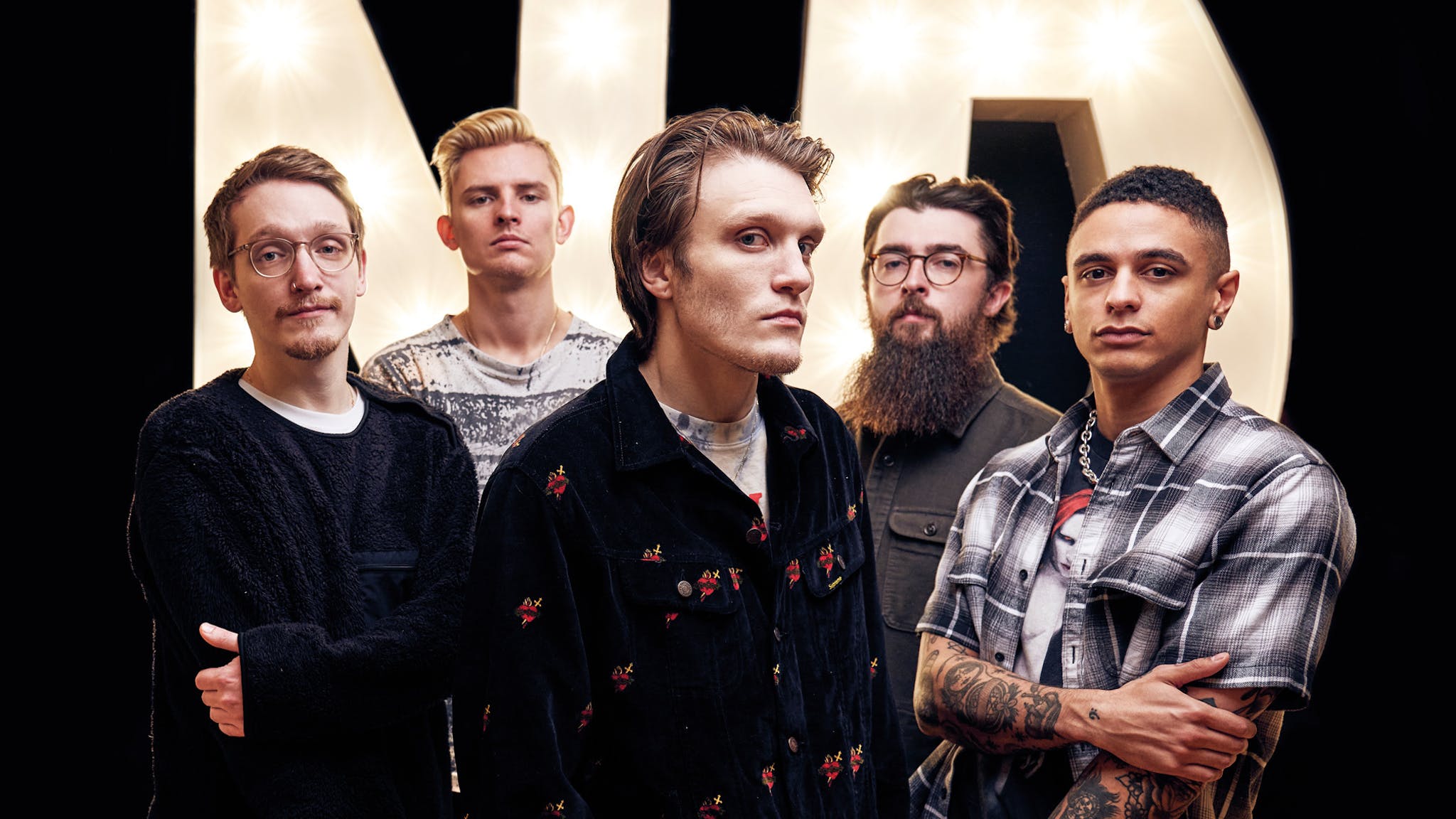 What have you been filling the time with in 2020?
​“Basically looking in the mirror and watching my hair grow in real time. I’ve been doing DIY – painting walls and all that shit. Playing a lot of video games, writing. It’s a weird time to be writing music, because it’s really hard to be inspired right now. You haven’t really got much driving you on. And we’ve just made a record! But during first lockdown everyone was like, ​‘We have to use this time to be creative!’ But I find being in a pandemic is one of the most uninspiring things ever, and I wouldn’t want to write lockdown songs. Everyone’s going to be doing that and eventually they’ll all come out and it’ll be like, ​‘Yeah, we get it.’ We have been writing here and there to keep flexing our muscle, but not a lot.”

You did your Halloween stream as well. How was it getting back ​“onstage”?
​“It was fun. It was nice to feel kind of like we were back in the swing of things, if only for a brief moment, and in very different circumstances. It went down well, and it was fun doing something like that. It lifted the spirits a bit and we had a laugh, so it was definitely cool. I think getting back to playing shows is going to be physically tough, but the adrenaline will just push through that.”

Has this given you an opportunity for reflection and to learn anything?
​“It fluctuates, really. On the one hand you feel like there’s so much time and so much to do, but on the other it throws a big spotlight on everything. So much of what we love about being in a band are things we can’t do at the minute. So it has allowed us to sit back and take stock a bit of what’s going on, and we’ve all done a lot of soul searching and thinking how we can be better and what this all means. Sometimes in a good way, sometimes not so good. But this hasn’t been an overwhelmingly positive experience for anyone – nobody’s gonna say, ​‘This lockdown’s been amazing.’ But we’ve all had to practice some resilience and do some soul searching, and it’s tested everyone. It’s been… interesting. Being in a band is very yin-yang, and to have half of that taken away is strange.

“If I’m gonna be really honest, if you want to know if there’s been any benefit – absolutely not. It’s been absolute shit! It’s been the worst fucking year of our lives. I don’t actually think it has made us better people for the experience, just made us much more fucked for it. I just want it over.”

We appreciate your honesty!
​“Well, I caught myself bullshitting there! I realised it was just waffle and bullshit. It fucking sucks. I appreciated what I have anyway, and now I can’t do that and it fucking sucks. The vaccine looks promising, but at this point I’m like, ​‘Pump me full of whatever fucking microchip you’re going to put in it and let me get on with my life.’”

There was some good news this year: Ryan Reynolds bought Wrexham Football Club…
​“Yeah! Small victories! I can’t sit here and pretend that I’m the biggest Wrexham fan ever, but it’s definitely great news. Not just for the club, which is historic and deserves to be in a better position than it is now, but great for the town as well. The appeal that two Hollywood celebrities bring to a small market town is crazy. I think as well that when a club gets bought out, a certain amount of that money has to be invested back into the community, which is great. One of the things Wrexham is actually known for is football, and Wrexham does breed some great players, so if there’s more investment in youth training and stuff, Wrexham could become known as this great football town. It could become pretty inspiring. And as a thing in itself, even just for bragging rights, it’s pretty cool.”

What’s your plan for 2021?
​“I don’t make myself a huge New Year’s resolution or anything. I guess I set myself a little change to make. Like, last year, I wanted to be more compassionate and more of a calm, level-headed person. I’ve been working towards that, but that kind of self-improvement might be it again. To try to be more at peace with myself.”

And what about with Neck Deep?
​“Some shows would be great! I think when you whittle it down to what a band is, when you get to a certain level, it becomes a lot of things, but really it’s about playing shows. Over the past year we’ve maybe made things a bit complicated by over-thinking things, so when shows come back maybe it’ll be more back to basics and just get them done! Everything’s been re-booked that we had to move, like Ally Pally, and in a way, it feels good to have that still to look forward to. It sucks that we had to move it and we’ve had a shit year, but having that still to come feels like there’s more to life than just staying inside and killing time!”

JAY WEINBERG On New SLIPKNOT Music: ‘We’re All Very Excited To Have Time To Focus On Our Creativity’