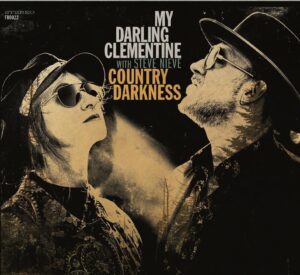 Country Darkness sees the duo offer their own take on a selection of songs from Elvis Costello’s plethoric repertoire . Louder Than War’s Craig Chaligne reviews.

First issued as three separate vinyl EP’s, Country Darkness sees Lou Dalgleish and Michael Weston King cover the great Declan MacManus with the help of the man’s very own keys master Steve Nieve. As always with My Darling Clementine, you can feel much thought has gone into the project and the song selection suits the duo’s musical style perfectly. The other perk of this album is that for people who’ve had difficulties appreciating Elvis Costello’s songwriting due to his sometimes “idiosyncratic” vocal style, this is a perfect occasion to discover how great his songs really are. To throw in a bit of a lazy comparison, it is a bit like listening to Glen Campbell put his own spin on a great song and hear him make it even greater.

The album starts with a bang with “Either Side of the Same Town”. Costello’s earthly version sees him channel a rootsy vibe reminiscent of a FAME studios recording when MDC’s is a soaring soul song with much power. “I Lost You”, a co-write with songwriter Jim Lauderdale swaps its mix of violin and pedal steel for subtle arrangements where Nieve’s piano runs intertwine themselves with Shez Sheridan’s guitar lines. Nieve hits another home run on “I’ll Wear it Proudly” where his parts provides the perfect setting for Michael and Lou’s singing while his use of electric piano on “Why Can’t a Man Stand Alone” coupled with the horns of Matt Holland and Martin Winning gives a totally new angle on the song. The plaintive “Crooked Line” from 2009’s “Secret, Profane and Sugarcane” gets transformed in a breezy pop number and “Heart Shaped Bruise” with just a spare piano backing Lou’s great voice proves to be a highlight.

“That Day is Done”, a song co-written by Costello and Paul McCartney for the later’s “Flowers In The Dirt” LP strips away the sea shanty vibe of the original demo and adds a Memphis tearjerker slant to the song with a soulful horns build up in its second part. “Different Finger” gets a calypso treatment that really suits it and while the next two tracks are obvious candidates for the MDC “treatment”, “I Felt The Chill Before The Winter Came” and “Stranger In The House” being dyed in the wool country songs, our hosts still manage to put their own spin on them. A spare “Indoor Fireworks” sees Lou start the song solo with just voice and piano before trading verses with Michael, hopefully this one will be part of the setlist when gigs resume as it is a show stopper. “Too Soon to Know” closes off the Costello selection on a gospel note before an MDC original titled “Powerless” which manages to sit comfortably against all these classic songs.

All words by Craig Chaligne. More from Craig can be found at his Author Archive. He tweets at @ChaligneCraig.