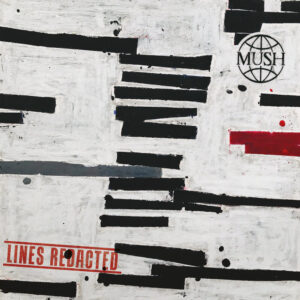 Leeds trio Mush return with their follow-up to last year’s 3D Routine and engulf us again in another blast of surrealist slacker post-punk art-rock.

It’s easy to reel off the influences of those that are defining the current crop of British guitar bands. Their punk-post-punk influences are worn clearly for all to see as they draw on the well dug deep by the likes of The Fall and Gang Of Four, but, despite their angular art-punk sounds coming back around and influencing many rising bands, Mush, who also clearly draw on this, are able to distinguish themselves from the pack through the way that add a slacker groove to the jutting rhythms. At times sounding like an inebriated Bryan Ferry fronting Pavement in tribute to Andy Gill, the trio have hit on an identity that is equally complexing and engaging on this, their second album.

They kick things off wonderful Drink The Bleach, a woozy stagger of lo-fi drawl, barely able to stay upright as it weaves through the air, the lyrics clearly a reference to Donald Trump’s insane rambling thought process through the beginnings of the current pandemic. It’s a song that wouldn’t have been out of place on Blur’s self-titled album, or 13, those moments when Coxon took the oars and steered their ship towards the US lo-fi underground. Their opening salvo of the album is followed directly by the riotous Blunt Instruments, which we previewed back in November. It’s a great track of twisted guitar parts that at times call to mind the zigzagging frenetic post-punk of the likes of Minutemen, Punishment Of Luxury, and Monochrome Set.

Clean Living rides a surrealistic carrousel, rising and falling, spinning and grooving on a sliding guitar rhythm while the recent single, Seven Trumpets draws on their lo-fi influences more and more, as though Stephen Malkmus is pulling the knotted strings of their climate emergency dystopia-fixated puppets. “There’s no sense of urgency. We’re going to die down in the water. We’re going to die down in the sea.” cries singer Dan Hyndman at the close of the song. “If we let these buried phantoms master us as we reappear, we’ll be swept back helplessly in the floodtide like pieces of flotsam.” wrote Ballard. A drowned world is a preoccupation that the band draw on here, and many of the songs on Blunt Instruments appear as though pulled by a tide not of their creators’ making, as though there is an underlying current that they are at once trying to control while simultaneously resigned to it leading them on its preordained path.

The album is a pure ride through their paranoic musing. Hazmat Suits, written in part by their guitarist Steven Tyson, who sadly died last year, is a zany and dizzying combination of the type of funk-infused post-punk of Minutemen and is a late delight in the second half of the record, crashing in before the muzzy Bots slurs out of a vertiginous haze with its musings on the CIA and KGB-controlled algorithms, basements of servers watching over us, influencing and controlling.

On Lines Redacted, Mush have turned their sights on the darkness behind the curtain, where the world’s stagehands are turning the cogs at the behest of the catastrophe directors while we, as actors, spectators, seem unable to do little more than play our scripted parts or look on in horror. The fact that they do this while simultaneously writing songs as entertaining as those here, never once going in for the obvious kill and ramming an easy metaphor in your face simply for effect, is a credit to them.

Blunt Instruments by Mush is available now from Sister Ray and from the band’s Bandcamp.