Muck And The Mires: Greetings From Muckingham Palace – album review 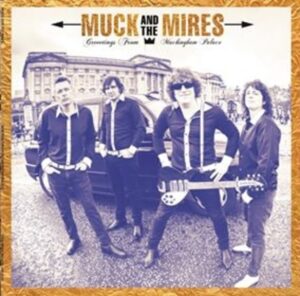 MUCK AND THE MIRES

Those fine and upstanding American ambassadors of grooving garage-rock, Muck And The Mires, are back once again with a new full-length album on Dirty Water Records

It’s always a great day when a new record from Muck And The Mires drops, and this new LP follows on swiftly from their previous EP. Their catchy garage/powerpop rock adds a lift to your step as they jolt out with yet another batch of their honed Hamburg Beatles meets The Ramones blend of rock ‘n’ roll.

They blast out of the gates with the rollicking This Time I Know I’m Right, harmonica flailing over their crunching guitars. As the vocals hit, harmonies propping it up wonderfully, they transport you straight back to The Cavern heyday. Songs like current single I’m Your Man and the cracking #Loneliness (originally released on their Muckus Maximus EP) inject a dose of early MC5 into the mix, while tracks like The Way Before and Good Enough bring a sweetness of The Raspberries’ powerpop into the mix. It’s that blend and straddling of styles that the band harness to full effect throughout the album.

Strange Waves adds a slinky guitar line and the flowing organ beneath glides the song along. It’s a slight psych touch that adds another string to their bow and marks the song out as a slight twist in direction. Album closer Break It All, a cover of the Los Shakers’ song, is pure Muck garage, the sound that they’ve been plying so well over the years and is the closest they get to songs like King Of The Beat from their fantastic 2011 release, Cellarful Of Muck.

In these turbulent times, Muck And The Mires are a constant. Every release is a masterclass in well-honed and perfected garage rock. They never went away, but it’s always great to have them back.

Greetings From Muckingham Palace is availbale now on preorder from the band’s Bandcamp and from Sister Ray.

The post Muck And The Mires: Greetings From Muckingham Palace – album review appeared first on Louder Than War.