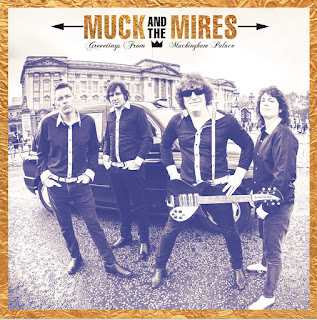 Yesterday I said that I would be writing about Muck and the Mires’ new album very soon. You can see I wasn’t kidding! Out on Dirty Water Records U.K., Greetings From Muckingham Palace is Muck’s first long playing album in several years. I love the idea of one of Boston’s most beloved rock and roll bands continuing its alliance with London’s finest record label. It’s like the British Invasion in reverse! Mixed and mastered by the legendary Jim Diamond (White Stripes, The Fleshtones, The Sonics), this album delivers a 100 percent guaranteed to satisfy Muck and the Mires experience. As always, the band finds that sweet spot where the early Beatles, ’60s garage rock, and power pop meet. Evan “Muck” Shore is in my book one of the most underrated songwriters out there. His affection for ’60s rock and roll and the Beatles in particular has been well documented. But it’s not just about the influences – it’s about what he does with them. And there aren’t a whole lot of people these days writing better pop songs than Muck!

Over the course of 14 tracks, Greetings From Muckingham Palace is able to explore the many facets of Muck and the Mires’ sound. And that covers everything from high-spirited British Invasion pop (“This Time”) to snappy garage rock (“Mint Condition”) to perfect power pop (“The Way It Was Before”) to psychedelic sci-fi/spy thriller rock (“Strange Waves”) to o.g. proto punk a la Hamburg era Beatles (“I’m Your Man”). “Too Soon To Fall In Love”, which you may recognize from the Muckus Maximus EP, still sounds like a lost classic from 1964. What I love about this album as a whole is that it’s just so uplifting. And on the first day of what we hope will be a brighter and better year for all, I can’t think of a more fitting album to celebrate. Greetings From Muckingham Palace is the kind of album you throw on when you want dance around the house, sing along to some catchy songs, and just have fun listening to rock and roll! Muck has managed to take the spirit of that timeless ’60s music he adores and keep it sounding fresh for 2021. If you’re looking for an album to wash away the stink of 2020, you’ve found it! Greetings From Muckingham Palace is available on both vinyl and CD. Hit up Muck and the Mires on Bandcamp for ordering information. Those of you on my side of the pond can also purchase the digital album and CD from Rum Bar Records. If only we could all live in Muckingham Palace!