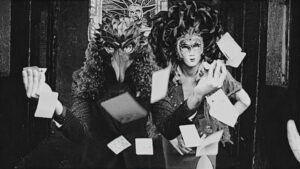 The concept of the “black swan theory,” used to prop up Karl. R. Poppers falsification theory, refers to the improbable, the surprising; the event that holds huge consequences, named as such for the rarity of black swans themselves. If a black swan can hold that kind of metaphorical power, then what of the distinctly more exotic black flamingo? Captured only on video once, this is certainly a creature of great mystique and magic. Thus, it is the perfect title for the debut album by the fittingly cinematic Venice Beach duo Movie Club, a band unafraid to break free of restraints and instead focus on building their mysticism.

Comprising of drummer Jessamyn Violet and guitarist Vince Cuneo, the three EP’s they have released in the past two years have certainly gathered them an underground following, but it is this full-length debut that has potential to cast them into a wider audience. Not that that really seems to be the aim; for Movie Club, boldness and experimentation clearly matter far more than any kind of commercial reach. “There aren’t many niches left these days,” explains Violet, “I felt fortunate to be in a project that’s not afraid to do something different with full force. We want to include everyone, and instrumental music breaks all boundaries.”

Well, there’s certainly no denying they manage that. As the name implies, they are film lovers who love to explore the visual (hence the German Expressionist-esque magic of the title tracks video), but what they can conjure up through sound alone is impressive. Opening with the grinding Phantasm, it builds up and sets the scene like the beginning of any film.  luring the listener in to wonder what the next reel offers – which turns out to be the whirling and engrossing Starcatcher. Without lyrics to explain anything, the listener is left to build their own picture through the soundscapes, and the result is captivating. Listening in the dark saw me take myself to an opening scene of moving through a giallo-lit bar, fingertips touching lightly upon the surfaces drifting through the long-lens viewed crowd, before later tracks waltz back into the aforementioned evocation of German Expressionism, but others may see/hear something different.

There are certainly consistencies in the patterns built up in this record – buzzsaw guitars, hints of cinematic strings, looping riffs – but the changes in pace throughout recall the twists and turns of any intriguing film. Whether going full-pelt in the most upfront rock traditions (Minehunter) or slowing things to a romantic wooziness (Bermuda Rainbow), like a road trip through a David Lynch film, with Movie Club you’re never quite sure where you’re going to end up.

Climaxing with the unabashed Devils Sea, this is an album that is bold, unflinching and achieves all of its aims of running wild and boundary-free. There’s an impressive supporting cast too. But its the vision of the leads that makes this record a niche standout. Orson Welles famously said that a film is a ribbon of dreams, and this pair of cinephiles have done a wonderful job in creating an intense dreamscape through audio alone.

Black Flamingos is released on vinyl and all streaming services on November 27th.

All words by Amy Britton. Find more on her archive here.