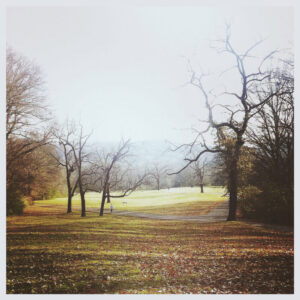 Molly Parden’s new album Rosemary is a collection of delicate songs that illumines the stark fragility of loss and its persistent, unlikely beauty.

The album feels so vulnerable that it draws an empathetic engagement with the listener, leaving us sensing the deep pain that produced it. Yet still, the songs throughout Rosemary encircle us with the warmth of Parden’s diaphanous voice. It seems natural that so much of the album’s imagery, in sleeve covers and music videos, contains dustings of snow and rosemary branches—that warm green against a cold, bitter white. They’re visual fragments that at once reflect the consummate chill of a snowfall while producing a sense of hygge—precisely what Parden’s exquisitely gossamer voice brings to a collection of songs with heartbreaking lyrics.

The video for Kitchen Table, the opening track, reveals an ephemerality that permeates the entire album. Digital filters create light leaks, creating a ghostly visual presence that lingers then fades. The sounds that emanate from Kitchen Table recall some of Paul McCartney’s sweeter and sadder works in his early solo work, especially the wistful synth in the opening verses of Band on the Run. That connection seems to come full circle in the ‘let it be’ refrain that echoes in Parden’s song, Feel Alive Again.

You can check out the video for Kitchen Table:

The midpoint track on the album, ‘Who Are We Kiddin’, breaks away from the tenderness that characterizes much of Rosemary, offering a brief reprieve from the solitude that shapes the record. The remaining songs are raw, lo-fi recordings that might trick you into thinking you’ve uncovered someone’s secret longings, captured on audiotape inside an empty home. Yet these are ultimately songs to share. The liner notes speak to Parden’s audience: “These songs are my friends. I take them with me to every show I play, I sing them quietly at home when I can’t seem to do anything else, or when I’m doing everything else. They gently tell my stories back to me. And now they’re yours, too. Take them with you.”

Molly Parden has been making music in Nashville, Tennessee’s underground scene for nearly a decade. She has toured with bands as a bassist, guitarist, and singer, providing backing sounds for musicians like Faye Webster, Sam Outlaw, and David Ramirez. She released her first album, Time Is Medicine (2011), through a Kickstarter campaign. Since then, she has been crafting the songs and sounds that you hear on Rosemary.