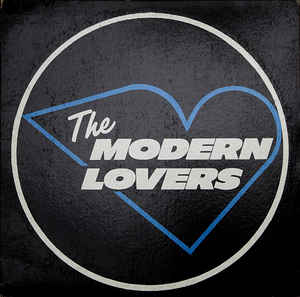 By the time the debut album from The Modern Lovers was released in the summer of 1976 (two years after the original line up had fragmented, their material on record finally reaching the public) , critics had already declared modernism as an artistic movement well and truly dead. Its architectural figurehead, Missouri’s Pruitt-Igoe social housing scheme, had been demolished, the “flat” paintings lauded by the likes of Clement Greenberg were becoming less prevalent, and even in literature the new “post” age had been ushered in by the publication of Thomas Pynchon’s landmark postmodern novel Gravitys Rainbow a year earlier. Initially, it would be easy to think that Modern Lovers is a record which cares little for this, with the clean, flat lines of the bands logo adorning the artwork, and the wry hints at morality in keeping with holding on to traditional dialogues.

In spite of this, this is a record , even with the gap between the recordings and the release, with its feet planted firmly on the paradigm shift, ensuring the creation of something which still sounds sublime today. Although plenty of tried to mimic it, few have come close. The sound which runs right through the album remains perfectly distinct, from opener “Government Center” with its handclaps, slightly nasal vocals and unorthodox lyrical theme, we quickly get a glimpse into what the whole album has in store for us. What eventually emerges is something which captures a moment, but in a way the year zero attitude of the punk movement lurking around the corner would not have dreamt of. The “modern world” is a frequently referenced thing throughout the record, something that is to be “in love with”, and “not so bad”, it is also twinned with a love for the archaic. This is most strikingly represented on a pair of songs on either side of the record, Modern World and Old World, in which the two are not pitched against one another, but both celebrated. the former moves at a spiky, fast pace that reflects the modern world and its rapid evolutions, whilst the latter slows things down a little to reflect on a love of old buildings, the 1950s, and your parents world. The latter, in a world were rock’n’roll is meant to involve a rejection of your parents world, is fantastically against the grain. In this respect, they weren’t necessarily archaic but two strides ahead, favouring artistic measured approaches rather than excess rock’n’roll posturing. This can perhaps be best heard on Pablo Picasso – the choice of artist focused on fully reflecting the modernist brief in the most literal fashion.

Relationships, too, are dealt with with an old-fashioned need to settle down. On a record which was created during an era in which “groupie culture” was at its height, songs like Someone I Care About and Girlfriend (the latter’s famous mispelling in the lyrics being one of the most unlikely moments of iconic charm in music history) imply a need to find “the one.” In the Modern Lovers world, women are far from disposable (although some of the language used on Someone I Care About and the slightly posessive nature of She Cracked haven’t aged so well.)

Of course, its not all charm, hand-holding, and 1950’s buildings. Hospital is a dark testament to loving the troubled or unwell, practically glaring down the interiors of its rapidly accelerating piano line that picks up like an overwhelmed conveyor belt tugging at the narrators thought process.

By the time the second half is reached, songs like Pablo Picasso, Astral Plane  evoke a self-assured strut of certainty down city pavements, and then of course the iconic closer Raodrunner puts us fully into a world of effortless, impossible cool. They just prove how few cliches you have have to follow to capture it.

All words by Amy Britton. Find more on her archive