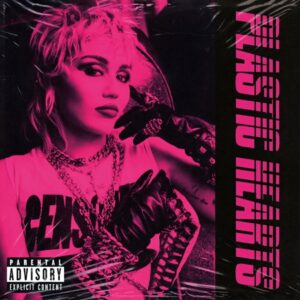 We all know Miley Cyrus: pop-puppet child-star who has grown into an iconic pop-cultural phenomenon,  But why is a Louder Than War giving her valuable space?  Well, because she has a great voice and this was trailed as being her ‘rawk album’ with punk influences.  Ged Babey (56) and Susan Sloan (a lot younger) give their contrasting verdicts.

My friends are probably right to worry when a fifty-six year old man admits to being obsessed by Miley Cyrus.  But its not like that.

My son introduced me to her work when he was a teenager, highlighting her charity the Happy Hippy Foundation and the fact she broke-down in tears onstage, following the death of her dog, surreally, at the feet of a 30 foot inflatable replica of her beloved Floyd. He thought these aspects would be of more interest to me than her actual music at that time. He was right.

Then I saw Miley sing with Joan Jett (and Laura Jane Grace) – and realised she was not too dissimilar to the former Runaway vocally and attitude wise.

I followed her career with interest, but as this excellent article proves, Miley is only truly unsurpassable as an interpreter of other peoples songs. She has a fabulous voice and inhabits the song.

The recent superb covers of Heart of Glass and Zombie are extras on the digital edition of Plastic Hearts and to be frank, they are far superior to anything on the actual album.

Plastic Hearts is not really the great ‘rock’n’roll’ album some of us are willing Miley to make.  It is a fantastic piece of product – which her devoted fans will like.  I have a suspicion that she yearns for that elusive, indefinable ‘authenticity’ and respect from supposedly ‘serious’ rock music fans as opposed to the pop demographic.

The fact she is using what she regards as punk-rock iconography interest me as an ‘old punk’. The type-face on the album sleeve is from the Plasmatics (in my opinion) a terrible schlocky-horror punk project who equated bared breasts to outrage and taking sledgehammers to TV sets onstage as subtle socio-political comment. Mileys new t-shirt range has ideas straight out of the Banshees/Fetish-era Antz wardrobe though, which at least shows she does her research.

Getting silly old crock Billy Idol in to share vocals on a song which resembles his White Wedding is not a move which will give Miley much credibility to fans of ‘proper rock’.  Yet she does perform highly credible Led Zep covers in her live set and was rumoured to be recording Metallica songs. Basically Miley can do anything she wants genre-wise because she has the voice and charisma to pull it off.

But for now her performances of Sweet Jane, Boys Don’t Cry and the latest, greatest, Doll Parts on the Howard Stern Show remain her most beautiful work in my opinion.

Miley fakes it so real she is beyond fake. (GB)

It should be no surprise that pop’s own Rebel Queen might eventually go rawk but Plastic Hearts is in many ways a surprisingly grown-up affair, channeling the MOR side of 80s pop-rock and country.

Collaborating with Joan Jett, Stevie Nicks and Billy Idol points heavily towards the mission statement for the album but there is without doubt more gloss than guitars, despite what the leather studded elbow gloves and fashion-mullet might suggest. However, while this mix will invariably generate sneers from ‘authentic’ rock music fans it hits a bullseye in her capabilities as a performer and is huge fun to listen to.

Like everything Miley has done since Can’t Be Tamed (a record that has more in common with Plastic Hearts than you might imagine) there is a perfect concoction of visuals, artwork and fashion orbiting the music.

Much like Lady Gaga’s Joanne it feels as though there is an element of cosplay to the rock ‘n’ roll persona. This extends to the songs which are peppered with with cheeky sonic and lyrical nods to her influences. But while Dead Petz remains the most believably honest and raw record she has produced this new release sits firmly on the right side of contrivance, the packaging and ephemera only serving to further enjoyment of the music.

The only dud track for me is single release Prisoner, featuring Dua Lipa, which somehow feels like the worst of both artists. Otherwise this a strong and cohesive collection of songs.

Night Crawling, an absolute ear worm that would be a shameless Billy Idol pastiche if it didn’t also feature Billy Idol, perfectly encapsulates the tongue in cheek side of the album whilst Midnight Sky, WTF Do I know and title track Plastic Hearts offer a more uniquely Miley take on the genre.

Surprisingly ballad heavy, the album closes with what I imagine is the only genuinely moving song to have been released named Golden G String.

Miley’s vocal talents have never really been in doubt to anyone not clouded by abstract hatred of her media image but it feels like she is finally moving into a more credible position of longevity as an artist.

Plastic Hearts doesn’t quite have the exuberant joy (or, ironically, as big a middle finger) for me as Bangerz but it feels like the perfect album for her stylistically right now.

Choice of Links to all outlets