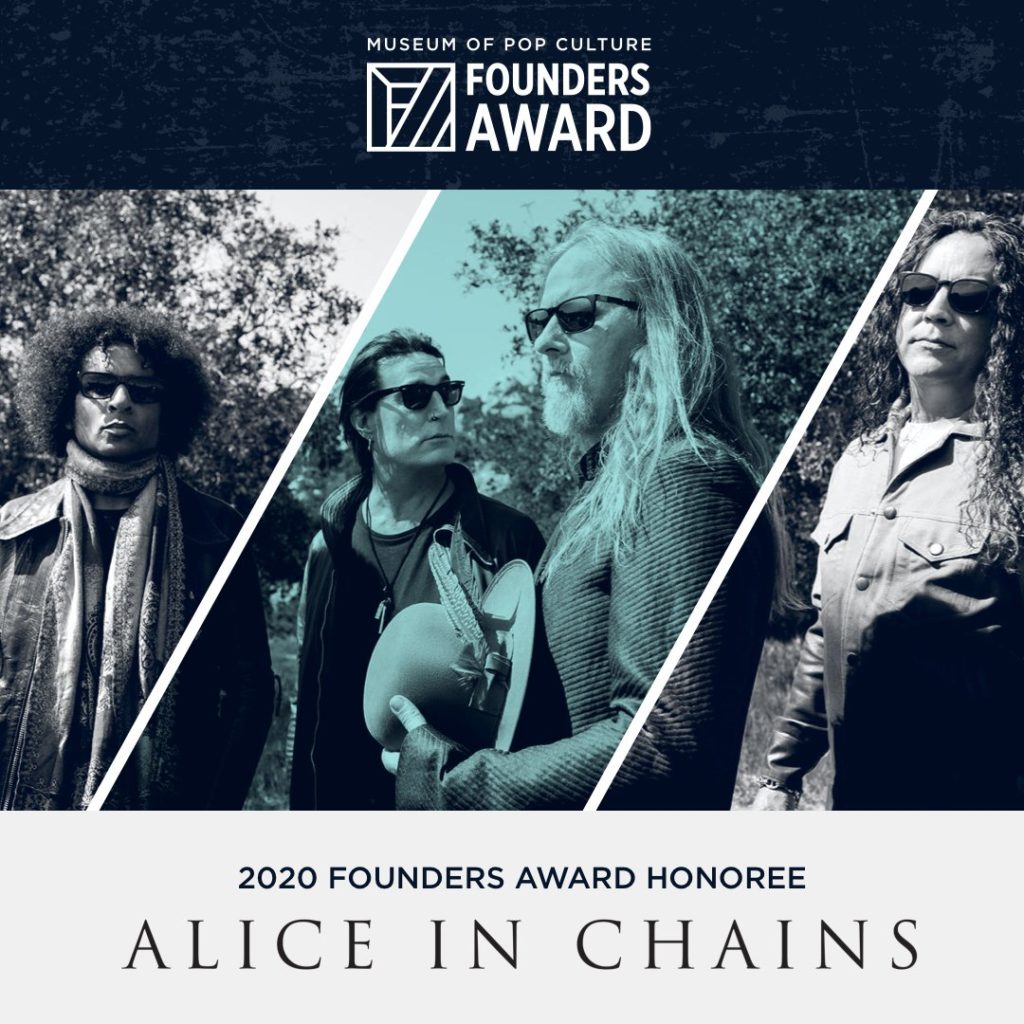 Seattle’s internationally renowned Museum of Pop Culture (MoPOP) today announced the tribute artist line-up for its annual Founders Award celebration on December 1, 2020. Due to the pandemic, this year’s celebration will be streamed virtually for the first time and fans around the world will be able to view the entire celebration online. RSVP now to get on the list to experience this one-night-only event. Once you RSVP, you will receive an email closer to the date with a link to join the broadcast on Facebook and Twitch.

“As our principal fundraiser, Founders Award is always a special event for MoPOP and we’re thrilled this year to honor Alice In Chains and provide free access to this magical evening fans around the world,” said MoPOP Executive Director Alexis Lee. “We’re proud to call Alice In Chains hometown heroes but we know we share them with the world. It’s a testament to their lasting impact that this talented group of musicians has come together to pay tribute to the band’s contributions to music and pop culture. We’re able to show the next generation of creators what’s possible through the funds raised at the event that support our youth development programs, our community engagement and access initiatives, and of course, the cutting-edge exhibitions people from around the world come to Seattle to enjoy. While this entire night of exclusive performances is free to view for all, our hope is to raise $1 million to support the museum in this difficult and unprecedented year.”

Alice In Chains, Founding member, songwriter, lead guitar and vocalist Jerry Cantrell said, “It feels truly special to receive the MoPOP Founders Award in our home town of Seattle. It’s also humbling to be joined by so many of our friends, peers and heroes to rock some AIC tunes. I hope people watching enjoy the show as much as we did putting it together. A big hearty thanks to everyone who participated in making this virtual thing happen during these strange times. Music has the power to unite, heal and inspire. It is all of ours. Let’s continue to create and celebrate that which feeds the soul. Rawk on!”

Founding member and drummer for Alice In Chains, Sean Kinney added: “When we got to make our first record, I thought, great, we will be able to make one record, do our thing and hope for the best. Now, 30 years later to get this award and still be touring and making music is the most amazing feeling. We are brothers with all of the craziness that goes with it. This is for Layne, Mike, and for all of us now. We can’t wait to get back out on the road once this hellish pandemic is behind us.”

Alice In Chains is one of the most successful and influential American rock bands of all time. Their storied history is woven into the Seattle music scene with musical contributions going back to their debut album “Facelift” which turned 30 this year and the long line of multi-platinum records that have followed. They continue to create groundbreaking music adding to the landscape of the most legendary musical contributions in all of rock ‘n’ roll. Their admiring peers will pay special tribute to their on-going legacy through unique, one-of-a-kind performances as well as congratulatory messages throughout the event.

In addition to performances from Alice In Chains and the tribute artists previously listed, the Founders Award entertainment will also feature performances from four Sound Off! participants. Sound Off! is MoPOP’s highly regarded 21-and-under music showcase and competition in the Pacific Northwest. Participants get the opportunity to showcase their original music in MoPOP’s Sky Church–a world-class venue–connect with peer musicians, and are mentored by industry leaders and an artistic community invested in welcoming them as full-fledged members of one of the nation’s most vibrant music scenes.

For the 2020 Founders Award celebration, MoPOP focused on giving opportunities to Sound Off! 2020 artists whose final performances were cancelled due to the COVID-19 shutdown. Audiences can look forward to performances from these young Northwest artists: Katy Rose, Human Missile Crisis, David’s Van, and Talaya.

Published in alice in chains, founders award and News: General