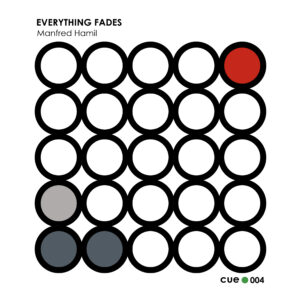 Electronica ace Manfred Hamil’s latest album is an exhilarating rollercoaster ride that will give you all the feels. Going all the way to heaven and back, Gordon Rutherford reviews for Louder Than War.

It’s not easy to define what makes great art; after all, the answer is wholly subjective. Nevertheless, for me there are two magical components that must exist in this alchemical process – emotional resonance and counterpoint. Whether we are discussing literature or film, visual art or music, great art has to affect the individual in some emotional way. One’s senses have to be aroused. And when I talk about counterpoint, I’m not doing so in a literal and theoretical sense in the context of music, but in terms of the way certain elements work in contrast with other elements. The interesting contradictions. The light and the shade.

By that definition, Manfred Hamil’s latest album, Everything Fades, is great art. I’m not an electronica geek. I love the very best of it, but I often find that the algorithmic, formulaic, computer generated nature of much electronic music leaves me a little cold. It may be technically dazzling, but it can often fail to engage with my limbic system. By contrast, Everything Fades worked exactly as great art should. It’s a sensory pleasure and when I listen to it I go through the whole gamut of feelings.

For those unfamiliar with the artist, Manfred Hamil is just one of many pseudonyms employed by producer Steve Kelly. You may have previously encountered his work under the moniker of Douglas Deep or Macerator or SK123. It is under the Manfred Hamil pennant that Kelly chooses to channel his more ambient, cinematic side of electronica. Think of the kind of output that consistently emerges from those legendary labels, Ninja Tune and Erased Tapes and you’re there.

Speaking of legendary labels, one well on the way to attaining that status is undoubtedly the imprint behind this release, Cue Dot. Everything Fades marks the fourth installation of the Cue Dot series and it comfortably maintains the high standards set by the first three releases. Cue Dot boss Paul Scott deserves immense credit for consistently putting out music of such quality in these challenging times.

Let’s return to that earlier topic of counterpoint. The most striking thing about Everything Fades is the way in which Manfred Hamil takes you on a voyage. In some ways, it is a journey akin to that laid out by Everything Is Recorded on last year’s Friday Forever album. It seems to document every single moment of a special night, from the build-up to the euphoric highs and the inevitable comedown. However, unlike Richard Russell’s project, this doesn’t take you on that journey in a linear fashion, one in which the tracks are arranged on a logical timeline. Instead, we climb rapidly to the summit, swoop down on the descent, then climb again. It’s as though Manfred Hamil is handcuffed to you and is propelling you along an ever-undulating rollercoaster ride.

That incredible thrill of not knowing what’s coming next is absolutely exhilarating. Conflict abounds throughout, as the tracks deviate from all-out techno to ambient bliss. Twists and turns, contradictions aplenty.

The album opens in style with the infectious throbbing beat of Asphyxiated. A voice implores us to “breathe”. It’s a timely reminder. The electrifying dance beats recede and we move into Before It Goes Down. It’s glitch, more pared back than the track that came before. The skittering hi-hat dominates. You think you are tuned in to it, but it’s creeping up on you unawares with each passing second, building to a crescendo until, by the time we are four minutes in, it is like a bombast. And then it descends and, as it does, one word resonates – “Down”. It’s a track over which the influence of Jon Hopkins’s epic 2018 release, Singularity, hovers.

Constructive Realism and Defect Analysis give us an opportunity to catch our breath before the album’s mighty leviathan, Eventuality, takes the stage. If there is any justice in the world, Eventuality will become an IDM anthem for a generation. It is utterly magnificent and it is guaranteed to fill dancefloors and uplift one to the blue celestial heavens. It’s a composition that would not be out of place on Screamadelica, with its production so reminiscent of Andrew Weatherall and a vocal channeling the spirit of the wonderful Denise Johnson.

Let’s bring it back down now. Forgotten What I Came In For is beautifully ambient with bells chiming peacefully. Following that, a military-like snare beat nails down Hope. It’s another ambient soundscape that has a Boards of Canada feel that is reassuring and relaxing. It’s Not A Drug, It’s A Drink continues in that gorgeous territory, with lush soundwaves washing all over you as the picked keyboard notes gently massage your senses.

It’s all about the counterpoint. The contradiction of the ascent and the descent. The emotional contrast between the tracks highlighted in the previous paragraph and the likes of Asphyxiated, Before It Goes Down and Eventuality is stark. They feel as though they are coming from different places, yet are totally conjoined. This is where the magic happens. That is the mastery of Manfred Hamil.

There is room for one more contradiction – one that differs again from the polar extremes outlined above – and it’s one that returns us to that theme of emotion. More than anything, Keiron’s Heart demonstrates the warmth and personality that is so often missing on electronic releases. This particular tune is like no other on the album. Sure, it’s powered along by a glitchy, infectious electronic beat, but over the top of it plays an emulation of a Kora, which I have learned is a twenty-one stringed West African lute-like instrument. Manfred Hamil has electronically recreated the sound, added lots of reverb and it sounds magnificent. It is a beautiful, organic, rootsy, folksy departure from the rest of the album, whilst at no time sounding out of place. It’s not what you would expect on an electronic album, but that’s precisely why this collection is so damn good.

Cue Dot and Steve Kelly/Manfred Hamil have set the bar high for 2021 with Everything Fades and other releases under the electronica banner will do well to match the brilliance of this collection. It’s one that will hopefully be picked up widely because it deserves it.

There’s one final little quirk to mention. There are twelve tracks in total on Everything Fades. The first starts with an ‘A’, the second with a ‘B’, and so on until the twelfth which starts with, you guessed it, an ‘L’. Perhaps as well as giving us the gift of a great album, Manfred Hamil is also setting us a mystery to solve here. If so, I haven’t cracked it yet, but I will keep trying whilst continuing to listen.

Everything Fades is available (digital or CD) on Bandcamp.