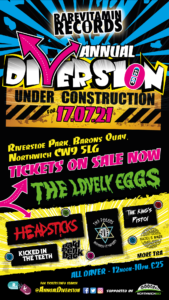 announcements being made daily for festivals and all day events that will hopefully be happening. Personally I reckon Boris’s roadmap is like a traverse through the Greek mountains in Lesvos, full of dangerous curves and 100ft drops, yet we all live in hope that these two events are actually going to happen. Both outside events and both with great line ups we present an update on Maccfest and Diversion to keep the fire burning in your gig junkie souls…

Rare Vitamin Records is proud to present the first Annual Diversion a one day out-door music event in Northwich, Cheshire.

Celebrating the best in new and alternative music the current line-up is as follows;

Following in the footsteps of Northwich’s rich musical history this is a new event specifically curated to celebrate the amazing wealth of talent that is coming through today. We were massively excited that The Lovely Eggs accepted our invitation to headline the first event for us, they optimise the DIY ethos that we think drives what has become a really vibrant and varied movement of bands and artists in recent years. Their last album I Am Moron was greeted with massive critical acclaim, especially being voted Number 1 in LTW’s Album Of The Year poll and topping the UK Independent Album Charts.

Chris Mundie (The Salty Dog) one of the organisers says:

“Rare Vitamin Records is all about new alternative music, there’s so much stuff happening now that doesn’t necessarily fit into one genre, people seem more accepting of other styles and approaches than a more tribalistic approach that has gone before, it’s great that music is progressing that way, it’s more open and accessible than ever and people are doing some really cool things. The label was set up with this in mind, Jason (the main guy behind it) has a boundless enthusiasm for discovering new bands and obsolete formats (Check out the latest King Gizzard Minidics and Mini CD sets), we wanted to reflect that in a nice day outside with some of the bands that Jason works with and some of the bands that have inspired him.”

“The future of music is bright ‘as fuck’ to coin a phrase used by your good self.”

“As we ease back into some sort of normality we are really pleased to be able to be able to put on this boutique sized event, it’s been a long wait and a windy road, but we want to make the first Rare Vitamin Records Annual Diversion a positive step along the way.”

Next up later this year is a diverse line up for a good cause which has something for everyone as explained below:

Background: Macclesfield has a huge history of music. It was the home town of Ian Curtis and Stephen Morris of Joy Division, plus Gillian Gilbert, who along with Stephen Morris was a member of New Order. A memorial to Curtis is located in Macclesfield Crematorium. Other Macclesfield acts to have gained recognition include The Macc Lads and Marion. Silk Brass Band, the Macclesfield-based brass band, won the National Champions of Great Britain title in 2003. The blues singer John Mayall was born here in 1933. More recently, local band the Virginmarys has achieved national and international success. Chart-topping UK band The 1975 also partly come from Macclesfield.

Despite having a rich musical heritage Macclesfield has few cultural amenities. In 2004, research was published in The Times naming Macclesfield and its borough the most uncultured town in Britain, based on its lack of theatres, cinemas and other cultural facilities. This festival is part of a council supported initiative to overcome this.

The location: Christ Church, a redundant Anglican church in Great King Street, Macclesfield, Cheshire, England. It is recorded in the National Heritage List for England as a designated Grade II* listed building, and is under the care of the Churches Conservation Trust and was in use until 1981 with a stain glass window before the stage that will take your breath away.

The festival is a non profit initiative working with The Christie Cancer Hospital, who are opening a centre in Macclesfield which has been delayed due to Covid. For more info on the new hospital check out the website here.

Friday is currently sold out but watch the Facebook page for a post Covid update in capacity.

Saturday Tickets are 50% sold out

DJS & After party bands still to be announced.

Tickets on sale from Macclesfield vendors and online after lockdown lifts.

Foreword by Wayne Carey, Reviews Editor for Louder Than War. His author profile is here