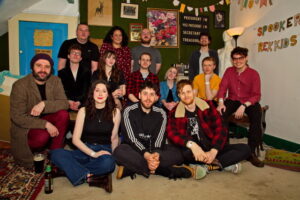 A crowdfunder has been launched by local musicians to help Middlesbrough’s cultural and community hub Westgarth Social Club keep putting on live music.

Lead by Teesside band Nel Unlit, local promoters The Kids Are Solid Gold and record label/ collective Spooker Rekkids they are backing a fund so new shows can be scheduled for 2021.

Like the majority of performance spaces The Westgarth hasn’t been able to open its doors since the March lockdown. The historic venue was founded in 1911, and across its three stages as well as giving local acts a platform has hosted acts including James Bay, Public Service Broadcasting, Wolf Alice, Pete Wylie, The Vaccines, Edwyn Collins, TV Smith, and First Aid Kit.

The Spooker Rekkids label is based in a small office above the premises working with local musical collective Nel Unlit, and other bands from across the north east.

With public support the idea is to establish a live music fund for The Westgarth to support the safe and sustainable return of live music and events to the club.

No donations will go towards the running costs of the club, with the fund only to be used by local promoters to allow them to subsidise ticket prices, to help towards the cost of sound engineers or to cover the shortfall in ticket sales due to potential crowd-limits.

Rewards for donations start from £5, and include special edition ‘Westgarth Forever’ prints, a Christmas compilation sampler from Spooker Rekkids and merch bundles from local promoters The Kids Are Solid Gold.

Those searching for something more unique in terms of rewards can even choose a local act to cover a song of their choice, or even attend a billiards tutorial at the club with Nel Unlit’s self-proclaimed ‘cue wizard’ Jon Horner.