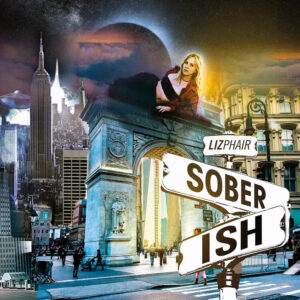 Soberish arrives 11 years on from her last album, the almost universally dismissed Funstyle in 2010. Although it was a challenging listen, after the polished, big-budget Liz Phair (2003) and Somebody’s Miracle (2005), to me it always sounded like she was cutting loose, having fun and sticking two fingers up to the haters. Liz’s herself said, “you were never supposed to hear these songs. These songs lost me my management, my record deal and a lot of nights sleep”.

The landscape is very different in 2021, and this album has been welcomed with open arms. Although she’s not released anything new for a while, Liz has been busy. As well as focusing for a long period on being a single mother, she was composing music for television and film; toured with Smashing Pumpkins and also solo in support of the 25th Anniversary re-issue of her debut. She’s also found time to write the book, Horror Stories.

“Probably the most pivotal in bringing me back was seeing that this world that I’d always dreamed of had actually come to be,” she says. “What I was longing for back in the early part of my career had happened! Everywhere you looked, on social media, there were women making their own music, fronting bands, it was their vision, they weren’t just women in a band, they weren’t just songwriters, they were the entire authors of the vision, head to toe. And it was so exciting!”

Soberish sees Phair reuniting with Engineer/Producer Brad Wood who’d previously collaborated with her on her debut Exit In Guyville (1993) and Whip-Smart (1994). Liz explains “listening to Guyville again, and immersing myself in my Girly-Sound demos, and talking with everyone from that era made me want to work with Brad again. Girly-Sound brought me back to that early part of my career and who I’d been then. What I wanted to achieve, what my style of working was. I connected again – in a much more healthy way – to the artist I was searching for at that point.”

Listening to the album I hear a distillation of a career 30 years finally blended with the lo-if indie sensibility of those early Matador releases and the pop sprinkles of the major/Capitol years.

Although untitled at the time, Soberish was first hinted at back in 2019. The first fruits of the sessions, Good Side, was shared across streaming platforms. Its release wasn’t confirmed however until more recently when it was announced she’d signed to Chrysalis.

Explaining the album title she says, “I just like that word. It describes what I’m always aiming for, I never want to be entirely sober, but I also want to stay grounded enough. It’s almost like you’re toggling between two versions of very familiar selves.”

Whilst the sound of the record may be a little different, Liz’s lyrical content hasn’t changed. You’ll find here the honesty of her debut, with topics here such as modern love, missed connections, separation, creativity and global change; or the “uncomfortable, turbulent, emotional world that we’re in right now,” as Phair puts it.

It reveals a songwriter more unflinching and more relevant than ever as she bears her soul once more. Regardless of when you first discovered Liz, there are touches that will make you smile, be it the mention of Henry The Bartender or the odd double entendre. Equally, if you’re new to her, Soberish is a great jumping off point and place to start.