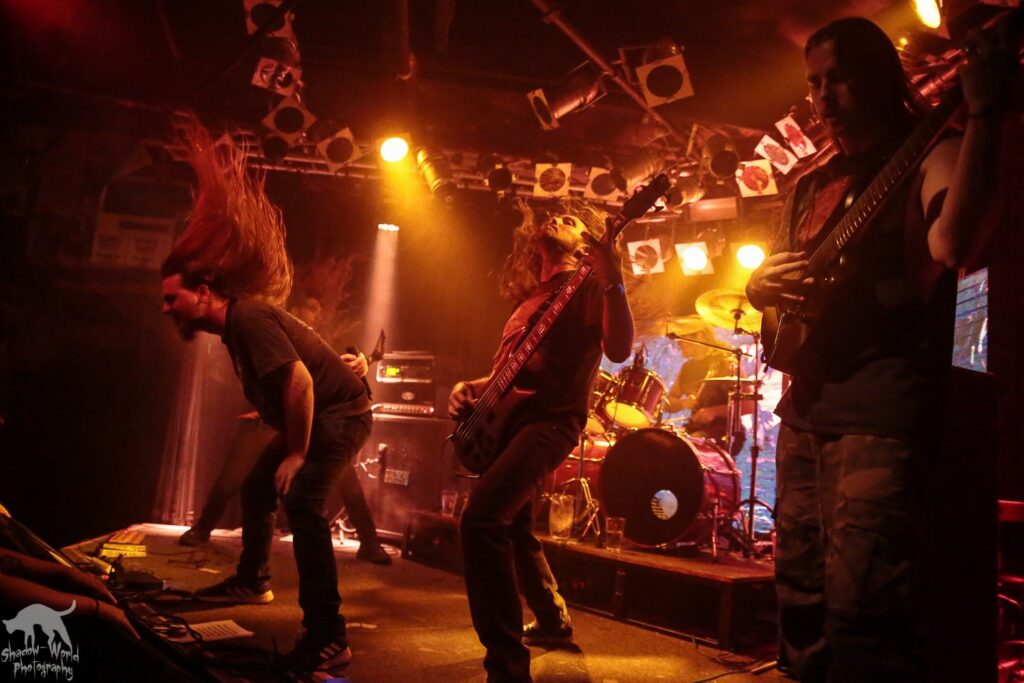 Friday 12th March 2021 Amplifier hosted “Harvesting The Depraved”, a triple album launch for three local metal bands, The Furor, The Harvest Trail and Depravity. Also on the bill are newer bands Ashen and Doomcave. In traditional amplifier style, the venue smelt like a toilet, you could smell it coming up the alleyway, the difference tonight being it smelt like a freshly cleaned toilet, one of the upgrades I suppose. With the fall back pressing against the stage instead of on the edge, it seems to expand the stage amply and not impacting the crowd capacity. The extended smoking area makes Amplifier one of the best venue for smokers, providing over a dozen tables and chairs.

Ashen blasted through the open doors as I arrived mid-set. A decent crowd filled the dance floor despite the early 7.30pm start. A new era of Amps with Magnet House (formerly Capitol) now opening the adjoining doors at 11pm instead of midnight, thus the gig finishing early at eleven. Despite all this the atmosphere was pumped and the Old Scool Death Metal blended with Melodeath tore through the air keeping the buzz high. Ashen released their E.P. “Godless Oath” last month and seemed to bring new faces to the crowd.

Doomcave’s dark presence took the smoke-filled stage, clad in their corpse paint as the once single-man band now has a live lineup and is showing Perths Black Metal scene isn’t quite dead. The relatively new band are exquisitely tight with seasoned musicians bringing their years of hard work and skill to the project. I am eager to see what this band grows to and cannot wait for their turn for an album launch.

First of the album launches of the night is The Furor with the, now, one-man Black Metal band obliterating, as always. The Furor never disappoint and always brings a massive crowd with immense support from the Perth scene, the “Obliteration Matrix” launch was a success with the room packed to the brim, joyous shouts galore. The talent and precision is phenomenal, the man is a machine.

The Harvest Trail launched their Debut album “Instinct” to a wavering crowd. Each time I see the band they increase in size, first time they played as a two piece, then a three piece and tonight they played as a four piece, joined by Jesse (Claim the Thrones Keyboardist) on Bass. The best performance of theirs to date, the energy on stage pulled the crowd back in and had a mosh pit going.

Finally Depravity hit the stage to launch “Grand Malevolence”. The non-metal crowd was already trickling into the beer garden and bowling alley, but the crowd went wild as the extreme metal assault started. Long locks flowing, the hair of each member of the band is enough to cause jealousy in male and females – the makings of a shampoo ad! Depravity and Harvest Trail shirts filled the audience, hopefully indicating good merch sales for all.