Listen to this! Stubborn Heart return with their first new music in eight years 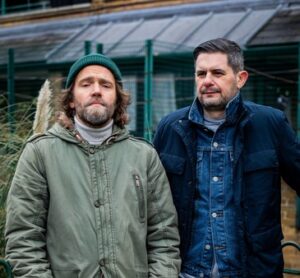 Stubborn Heart are back with their first new music in eight years with Made Of Static, released on June 4th via One Little Independent Records.

Luca Santucci and Ben Fitzgerald have spent that break developing ten electro-soul tracks that make up the successor to their critically acclaimed 2012 self-titled debut striking a fine balance between synth-soundscapes and introspective songwriting.

Balance is the key theme on the record with Fitzgerald leading the production and manning the machines, and the sound is rawer than on their previous album. Left-field pop with dark, icy edges, Made of Static finds a home somewhere in between R&B and cold wave. Santucci brings the heart with his aching, obsessive lyrics and a desire for something grittier in its presentation.

Santucci has amassed an impressive list of writing and vocal credits in his time, with the likes of XL and Warp signee Leila Arab, Plaid, Riton and Soulwax amongst them. Fitzgerald has also been hard at work at his home studio programming various styles of music for artists and producers from around the world.

As Stubborn Heart, they come armed with some serious experience and a wealth of influences. There’s an honest simplicity in the way they create, with lyrics written in an immediate, direct fashion with the aim to catch a feeling rather than emulate one.

On their first album, Stubborn Heart won praise from the likes of Pitchfork, NME and the UK broadsheets. It was named album of 2012 at Gilles Peterson’s Worldwide Awards and Rough Trade placed it in their top 20 best albums the same year. But Santucci and Fitzgerald say this album better represents their dynamic with plenty of combined creative static aiming to step on from where they left off.

The post Listen to this! Stubborn Heart return with their first new music in eight years appeared first on Louder Than War.