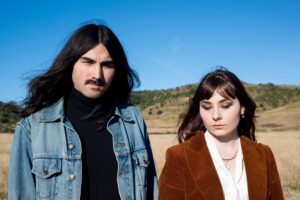 Indie-rock duo Salarymen return with soaring new single Something To Me and an accompanying video. Take a listen.

Built-up of jangly guitars and warm analogue synths, Salarymen have a sound that’s difficult not to fall in love with. Comprising of Renee de la Motte and Thom Eagleton, the duo have a knack for piecing together their different influences to craft a sound that’s their own – from dream pop to psych-rock, and everything in between.

Something To Me is the latest in a string of singles Salarymen have released this year, following the playful and poppy Runaway from a few months ago. Released via new label Scenic Drive, it’s their best single yet and shows that they’ve just about mastered the art of crafting songs that soar.

Driven by a rippling guitar riff and a melancholic synth line, it’s a bright song with an undercurrent of sadness. The song erupts on the chorus when Renee and Thom’s vocal harmonies bring all those searing emotions to the surface.

Watch the video for Something To Me below:

The post Listen to this! Salarymen release new single Something To Me appeared first on Louder Than War.