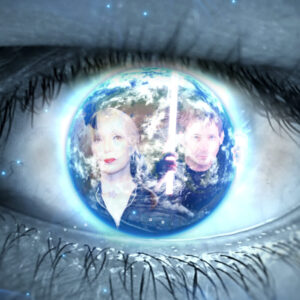 Ready for change? So are Misled Convoy and Kat Five in their latest release, Apply the Pressure.

The future has never sounded so poised on the cusp of positive transformation as Kat Five prophesies thoughts and words of change over Misled Convoy’s bass heavy soundscape, inviting us to apply the pressure and “tip the world back round rightly”.

Inspired by the echoes of a conversation found on a Soviet-era spying device bought at a boot sale in East London, but with no idea of its origin or timeline, Michael Hodgson AKA Misled Convoy decided to create a track and invited Kat Five, of Feral Five fame, to join the narrative.

With Kat delivering vocals, synths and guitar, Michael reached back to his New Zealand roots and invited Greig Bainbridge to drop a bassline, which arrived driving and futuristic. Dave Fullwood, from the Ital Horns, provided a haunting brass accompaniment, trumpeting in a new dawn.

Finally visual artist collective kennardphillipps provided an arresting image that represents the state of a planet barely coping with its human inhabitants.

Apply the Pressure is a clarion call from the people of the planet seeking a new direction.

“Out of the darkness
The new light comes”

Listen to the track by Misled Convoy x Kat Five below.