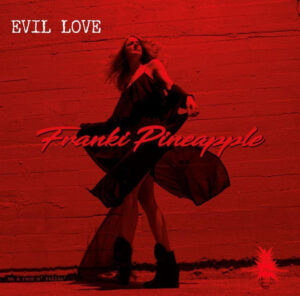 Inspired by a romantic entanglement with an older man and an addictive, lustful connection between them, new single from Hollywood’s Franki Pineapple captures the moment when one manages to finally escape a toxic relationship in her new single Evil Love. Have an exclusive first listen here at Louder Than War.

Evil Love was written in 2008 by Franki (real name Stephani Carlisi) and has been a signature song within her live performances. With a Stevie Nicks polish and this track acting as a more digestible follow up to her previous release Fuck It Man, which was aimed at Apple Inc. after they took her to court over appropriating a fruit in her name, this song really embodies the moment of bliss when one has finally managed to escape an unhealthy situation.

Franki exclaims that the song’s inspiration led her down a “rabbit hole into the deepest, darkest obsession you could ever imagine”.

“Evil Love was born of pure obsession. I could throw a cliché and say my heart was broken when I wrote it; but, looking back, my heart was broken long before I met the man who inspired the song. I had been in a complex, open-door-slam-door relationship with this older man for five years at this point in 2008. We had both entered other relationships along the way, but still we could not quite quit one another.”

“It was a living nightmare that ended up being one of the most beautiful and fruitful experiences of my life. Evil Love has evolved over the years. It has come to symbolize so much more than a painful love affair. The song is not frozen in time.”

With a logo created by none other than John Pasche who had years earlier designed the iconic ‘lips and tongue’ logo for the Rolling Stones, Franki Pineapple is a force of nature. Dedicating her life to storytelling, she is a novelist, journalist, screenwriter, poet and spoken-word artist, first dipping her toe into the music world in her twenties when the legendary songwriter and actor, JD Souther (The Eagles) hired her to transcribe his lyric journals. Encouraging her talent for writing lyrics, JD unleashed an animal: a bold, authentic, truthful artist now calling herself Franki Pineapple, after her producer and partner, Nararaj Tribino (PM Dawn; Nile Rodgers) suggested it (spikey on the outside; sweet inside).

“At the risk of being dramatic, writing Evil Love saved my life; it gave me a channel through which to express my pain. I was literally on the floor, broken, when the inspiration came. Thematically speaking, evil love is anything that holds us back from being the best we can be in life; whether it’s unrequited love, self-doubt, addiction, oppression, fear or discrimination.”

Inspired by an excruciating love affair, the track took shape and was expressed through Franki’s guitar playing and voice. It evolved into an anthemic ode to self-doubt, self-sabotage and “lack of self-love that had seeded during childhood. I now comprehend my relationships with men have served as projections of my original pain—the pain of losing my father to a drug overdose when I was five years old and believing I was simply not worthy of his love.”

She continues. “Addicted to abandonment, longing and dissatisfaction, I spent a lifetime choosing situations that were just out of my reach, in love, career, friendships, seeking fulfillment through substance abuse, and vying for validation through my art; in order to confirm my original belief that I was unworthy of love and true happiness. Evil Love addresses that belief dead-on. My deepest desire is for the song to empower anyone else in this world who unwittingly allows fear and false, self-limiting beliefs to obstruct their own greatness and stop them from being the best, most joyful and most fulfilled they can be in life. We all deserve it.

Funny, all those years I thought Evil Love’was about him; turns out it was all about me.”

All words by Jasmine Hodge. More writing by Jasmine can be found at her
author’s archive. Jasmine is also on twitter as @ObviouslyItsJaz