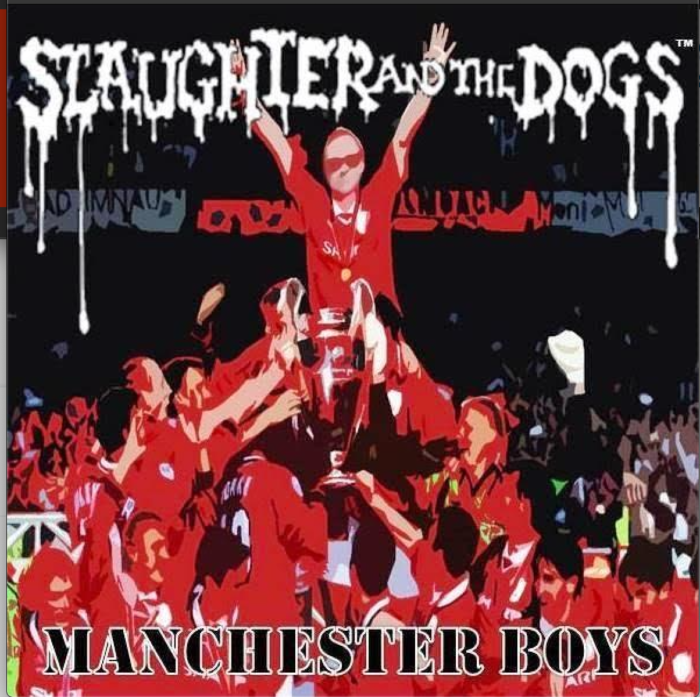 We say
You can hear the track here
Slaughter And The Dogs are one of the key bands that came out the Manchester punk scene. Punk aficionados will always talk with great enthusiasm and their influence over bands as diverse the Stone Roses, the Smiths and many Oi bands is well documented.
Their classic early singles like Cranked Up Really High and Where Have All the Bootboys Gone? are powerful rushes of adrenaline and melody encased in a brilliant production from Martin Hannett that really stands the test of time.
The band were formed at the bootboy end of Glam hence their monicker which is a cross between Mick Ronson’s Slaughter On 10th Avenue and David Bowie’s Diamond Dogs . Their council estate take on glam saw them a perfect shoe in for punk and they supported the Sex Pistols at one of the classic 1976 Manchester Free Trade Hall gigs.
Over the years they have become punk classic headlining many of the worldwide festivals and the current line up sound as ferocious as ever with their new single Manchester Boys which is their first release after guitar player Mick Rossi left the band.
They say
“Slaughter and the Dogs® are BACK and more FEROCIOUS than ever  With a younger, 5 piece line up that is faster, meaner  more furious and taking out the frustration we all have and feel about venues closing, and bands not being able to play worldwide.
“Manchester Boys,” the new single out from Slaughter and the Dogs®, is a fast; hard; chant-a-long, piece of genuine punk rock.  THIS is what Slaughter and the Dogs®  are all about.
Wayne Barrett and the boys take you back to the good ol’ days of football matches, pub brawls and sing-a-longs after the game!
Give it a listen. YOU WON’T REGRET IT!
Out NOW on Blighty Records.