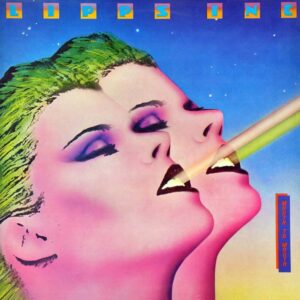 Reissue of the 1979 debut album from the Funkytown hitmakers, which also includes their first single Rock It. This edition contains single edits of all four of the LP’s tracks. Ian Canty tries to make a move that is right for him…

When some of the new wave’s rather ridiculous prejudices against dance music began to subside, many an earnest post punker could be found labouring long and hard at attempting to distil the perfect synthesis of electronics and disco. The irony was that Minneapolis duo Lipps Inc had already gone and done it by 1979 with Funkytown from their Mouth To Mouth LP. The song was a massive hit early in the next year when it was extracted as a single, eventually selling 8 million copies worldwide and topping the charts in many countries, including the US. The perfect combination of soul voice and machine music, it was a deserved success that it stopped just short at number 2 in this nation. Even so it was one of the very best singles of the year in a 12 month period littered with them.

Lipps Inc were the brainchild of Highland Park native Steve Greenberg. As a youngster he learnt the drums and joined his first band when he was still at school. In addition to band duties, he also started to experiment in sound, “bouncing” recordings from one tape deck to another, adding voice and instrumentation to build a track. This showed an invention which would come in handy later. What may seem like the standard musical career arc took a wild deviation from this route when he happened to visit a Los Angeles club during the early days of disco. Totally rapt by the experience, he quickly got together the equipment to set himself up as a DJ. After a try out of the format had a big response a wedding he and his cousin were booked at as the duo Atlas & Greenberg, he was flooded with requests for bookings.

In early 1979 after a successful run of engagements, Steve decided to try and put together his own version of what he was playing in his DJ set. He worked to perfect the backing track of Rock It, playing all the instruments much like fellow Minneapolis dweller Prince. He then set about finding someone to sing the song itself. Luckily he was referred by one of the auditioning vocalists about Cynthia Johnson, who had been in Flyte Tyme with Jam And Lewis. She had the ideal voice, smooth as silk but explosive too, so Lipps Inc (a pun on term lips sync) were born. The single was satisfactorily completed and the duo readied for action

500 copies of Rock It were released by Flight Records, causing a big reaction on dancefloors as club DJs in the states went mad for it. Neil Bogart’s Casablanca, the preeminent disco label, swooped and with major backing the record showed up in the top twenty of the r&b charts and was also a minor hit on the pop listings in America. This positive reaction spurred the duo to record their first album and Mouth To Mouth duly arrived in the final overs of 1979.

The first Lipps Inc album consists of just four tracks, with the extended Funkytown being a consummate opening gambit. It works well in its original, longer format, with Cynthia and Steve able to cut loose with vocal fireworks and odd electronic touches, whilst always keeping the beat jumping. The song is in fact a classic rock & roll story of needing to leave a small hometown for the big city in order to make things happen, but the modernistic setting puts it on another level. All Night Dancing would have been a natural follow up single, but unfortunately in their wisdom someone had slapped it on the flipside of the hit. A missed opportunity, as a sweet and soulful Cynthia Jackson vocal plays over a more standard, but attractive disco arrangement with plenty of slap happy bass.

Rock It starts in austere fashion with just strident electro handclaps, before Greenberg’s whispers, a bouncy bassline and a dash of strings lead to Johnson’s voice. The mix has a bit of an I Feel Love thing dropped into it. A queasy vocoder on Power and solid electrofunk rhythm mean that it is the closest thing to Funkytown of the other three items included, with Cynthia providing another strong vocal with a hint of the blues under the synth beat. Though Steve Greenberg was never happy with the track, to me it still is a fine slab of hi-tech r&b.

Seeing as all four album tracks were released as singles, they are also included here in their 7 inch forms. Each works perfectly well cut down. Which in a way makes one wish that they had featured that way on the album and room had been found for another few songs in the electronic dance mode, but I suppose the longer versions were essential for discos. Of the four, Rock It sounds urgent and fresh as a 7″ and Power is agreeably quirky at this length.

After the album it was obvious to anyone with ears that Funkytown would be an all-conquering single and so it was. Sadly it was also impossible to really follow up and although Lipps Inc scored US dance and r&b hits as the 80s went on, they never troubled the pop charts again. The band recorded three further albums, but after a raft of line up changes with Johnson leaving after after third long player Designer Music, by the middle of the decade they had split up for good. Funkytown obviously was a bit of a cross to bear. I’m tempted to say it is so perfect you shouldn’t touch it, but then again Australian bar band Pseudo Echo had a go and didn’t turn out too badly out for them.

Nevertheless the original version is by far the best and on Mouth To Mouth Lipps Inc offered disco a route out of its late 70s doldrums. I feel it represents a pivotal point for dance music, as here they embraced new technology and as such showed the way forward for a myriad of artists such as Air, Daft Punk and probably the whole house music explosion too. If you’re only going to have one hit, make it count and Lipps Inc surely did that.