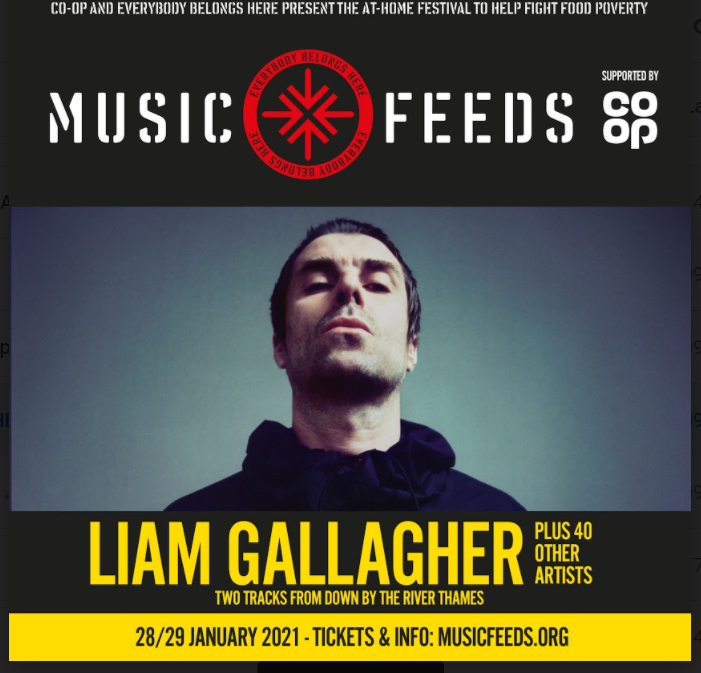 Liam Gallagher, DMC, Amy Macdonald, Beverly Knight and James are among the acts added to the bill for next week’s Music Feeds stay-at-home on-line charity festival.

Music Feeds is the brainchild of James’ Saul Davies and his Everybody Belongs Here organisation. “At Music Feeds you’ll get never-seen performances from leading artists, uncover new bands, and get up-close and personal with interviews.

“The festival will be broadcast to your Smart TV and devices over two nights and festival goers can even join the sofa mosh-pit via the simultaneous Twitter listening party. Additional artists who have been unable to perform have donated unique items for the companions Music Feed charity auction.”

In addition to the well-known headline acts, the festival showcases new and emerging talent. One of those artists are Kent-based duo SKIES. After over 160 live streams to their fan group as well as a garden tour in the last ten months and are looking forward to being on the bill.

We spoke to Alie and Jericho from the band – “We’re so excited to be part of this huge line up – and for such great causes! Especially after the acoustic live streams we’ve played the last year, it’s great to have the opportunity to play to an even wider audience with a full band set up for Music Feeds.” 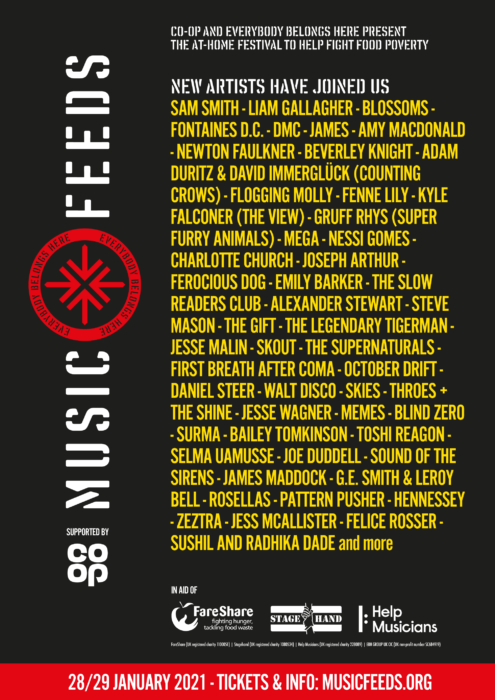 Liam Gallagher’s set includes highlights of his December Down By The River stream. All other performances are exclusive to the Music Feeds festival.

Co-op have donated £1m to be split across the three charities. They have worked with Marcus Rashford to raise funds for Fareshare across national media campaigns. In addition, they were one of the first signatories to the footballer’s Food Insecurity Taskforce.

Their food CEO, Jo Whitfield, commented “Hunger knows no borders, and neither should our response. All year round, Co-op works to tackle food hunger and we’re thrilled to be uniting with outstanding musicians from across the world to turn up the volume on the issue.”

“The pandemic has brought a sharper focus on issues such as food poverty and many in the music industry have seen their livelihoods disappear overnight because of lockdown restrictions. It’s right that we should lend our support and co-operate with musicians to raise awareness and raise funds for such vital causes.”

Tickets for the Music Feeds festival cost £15 for both nights (Thursday 28th and Friday 29th January). It starts at 8pm UK each night.

A single ticket gives access to both nights – available via DICE.

You can find more information on Music Feeds on their website.