“We thought of life by analogy with a journey, with a pilgrimage, which had a serious purpose at that end, and the thing was to get to that thing at that end. Success, or whatever it is, or maybe heaven after you’re dead. But we missed the point the whole way along. It was a musical thing, and you were supposed to sing or to dance while the music was being played.” – Alan Watts

Yesterday was Memorial Day, a holiday of remembrance in the United States, honoring the fallen who served in the military. Originating after the Civil War as “Decoration Day,” the holiday has evolved into a curious combination of the Day of the Dead…and a jolly reprieve from a grueling work day.

In the western world, productivity is highly lauded, and so is the sacrifice of the soul to a cause: a career, the country, a calling. “Retirement” promises rewards in one’s twilight, after they’ve been drained of their productivity. Concurrently, depression, ennui, insomnia, anxiety and personal stasis have clouded the human experience; even the methods purported to solve these ills are shamelessly exploited, from pharmaceutical companies, to pricey yoga pants, to mass-produced witchcraft accoutrements. For all our commonalities and differences, however, we all experienced being born, and we will all experience death. As society returns to “normality” from a year and a half of limbo, paralyzed by fear and pandemic, what lessons have we learned as a collective? What lies beyond the material and ego attachments of the present world? If we cannot take it with us…what lies ahead for each and every human soul when it comes time to transition?

Trailblazing musician and performance artist Laurie Anderson, Tibetan singer/musician Tenzin Choegyal, and composer and activist Jesse Paris Smith (founder of Pathway to Paris; daughter of Patti) address the blissful shedding of these worldly concerns with a stunning interpretation of the Bardo Thodol, commonly known as The Tibetan Book of the Dead. The album, Songs From The Bardo, is a transcendent experience, intended to draw the listener into the present, and to provide a framework for inner exploration of the soul.

Songs From The Bardo, nominated for a Grammy this past year, serves as a contemplative musical meditation, with Laurie Anderson’s voice gently guiding the newly departed into the next state of consciousness. Using Tibetan singing bowls, drone strings, crystal bowls, gong, lingbu (Tibetan bamboo flute), dranyen (a Tibetan stringed instrument) and Tenzin Choegyal’s hypnotic chants, the album weaves a rich tapestry of sound, wrapping the listener in soothing contemplation.

Tradition calls for a teacher to speak the words of the Bardo Thodol to the dying as a reminder of how to navigate the path. The album begins with the traditional Homage to the Gurus in both English and Tibetan, moving on to The Heart Sutra, a spoken-word performance accompanied by strings.

Laurie Anderson recites these instructions on how to pass through the various states, interspersed with Tenzin Choegyal’s beautiful singing. For those left behind, this recitation serves as a balm for the deep sting of grief.

The Bardo Thodol has inspired countless cinematic, musical and literary interpretations. The Beatles’ Tomorrow Never Knows and Lennon’s Imagine, Bowie’s Quicksand; Alan Parsons Project’s Time; the entirety of Twin Peaks. Songs From The Bardo, however, is created as the Bardo Thodol was intended: a spoken-word guide for the last gentle push into the next state of consciousness.

In an interview with Jesse Paris Smith, she outlined the process, and lessons learned, in creating the album.

The project started out as a way to both collaborate with Tenzin and to help deliver the important text of the Tibetan Book of the Dead in a new way, via music and sound. It isn’t to say that the text hasn’t been previously presented through performance, multimedia meditation, etc. but I am always excited about new collaborations and creative challenges, and this idea Tenzin presented felt very natural to move into.

Did the Bardo Thodal hold a personal resonance with you before writing the album? How did the work guide you through the process of composing?

I am not a Buddhist, though have been around and influenced by Tibetan culture and Buddhism since I was little, and knew already of the Bardo and this sacred and ancient text. I have my own experiences with the bardo journeys of others who I’ve been close with, and I am very interested in different religions’ philosophy and ideas around death and what happens after we die. My background is in both therapeutic music and composing for other mediums like film and poetry, so for me the experience was to take a back seat to the words, and use music and sound to support the energy, emotion, and journey of the text as best I could.

What did you want to bring to the table as a composer? Did you have any set ideas before going in, or did it emerge organically as you were working together?

Again, it was for us more about supporting the text. I didn’t feel that any of us saw ourselves as ‘composers’ during the process, as much of it was improvised based on cues of emotion and energy. So while Tenzin and I created a ‘script’ for the project with musical cues for each of us to follow, the most important thing to bring into the experience was the intentions of true listening, stillness, connection, and presence.

What lessons did this project teach you? What did you learn from Tenzin and Laurie?

Songs from the Bardo began as a meditation/performance at the Himalayan art museum in New York City, and it was not our intention from the start to create this as an album. Following the evening, we all decided we should document what we experienced together, so shortly after we went to a recording studio. This was many years ago in 2015. Years later, Smithsonian Folkways was interested in releasing the recording as an album, and it took on a whole new life and identity. We never could have imagined what would be on the way, reaching the Billboard Chart #1 in the new age category, being nominated for a Grammy, and most importantly, the people the album has been a comfort and support to, especially right now in this last year of Covid loss and isolation. I suppose what this album taught me most was that we can never know what will come of the collaborations and creations we make, so it’s best to have faith and keep going, following our hearts with clear intentions as we use our energy and put things out into the world.

What are your hopes for this album?

My hope is as it says in the liner notes, that it continues to reach anyone it needs to in whatever way they want or need it. Beyond that, my hopes for the album have far exceeded anything I could have imagined. To see an album like this be recognized by something as mainstream as the Grammy awards to me sends a message about the way the Western culture views around death may be shifting in a positive way. I also was very moved that both a Tibetan artist and text was highlighted and honored in this way, as this brings more attention to Tibetan culture, history, and present situation. All of these things far exceeded my hopes and continue to do so.

How has this experience inspired or changed you?

It is inspiring to always be reminded of the power of music and sound, and the way it can break down and redefine borders of all kinds – geographical, religious, etc. The Tibetan book of the dead might be a Buddhist text, but it is clear that the concepts within it are healing and comforting to anyone who is open to it. On the songs when Tenzin is singing, though he is singing in Tibetan, a language not everyone listening will understand, the emotion of his words and voice can be truly felt in an unexplainable way. Infused into the entire album is an energy of care and love, and it isn’t about Tenzin or Laurie, me, or anyone – the hope is just that this can be felt to anyone who is listening, and that they can somehow take in what they hear and make meaning of it all their own. 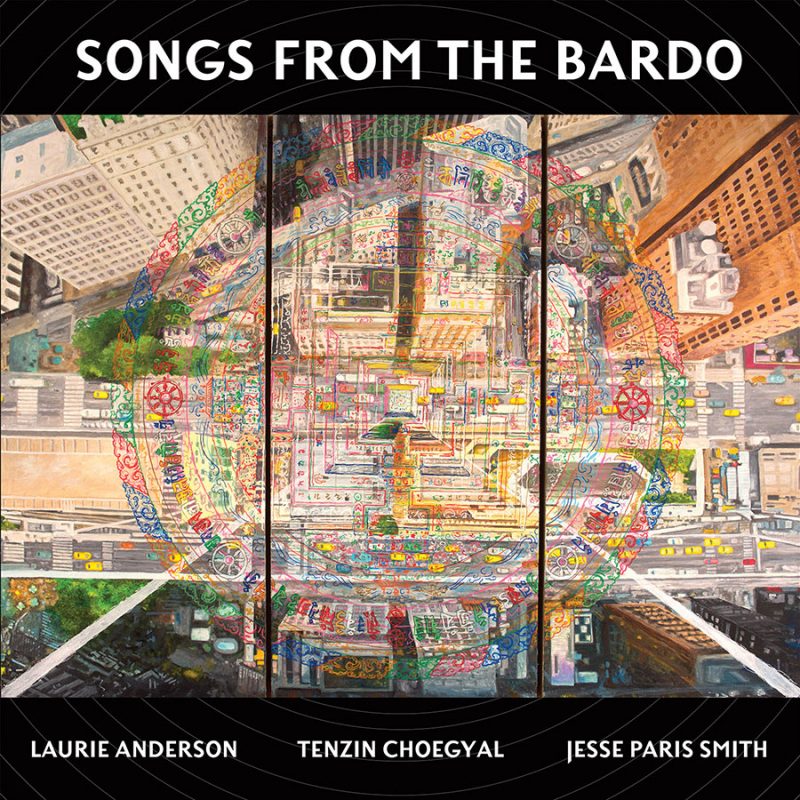 The post Laurie Anderson, Jesse Paris Smith and Tenzin Choegyal Guide The Departed With “Songs From The Bardo” appeared first on Post-Punk.com.