There is probably no band that doesn’t dream of playing at Germany’s Wacken Open Air, the biggest festival in the metal world. KROKUS rocked there for the second time in August 2019, this time on the main stage. What belonged together came together and the guys, who have played over 2,000 concerts worldwide in their 46-year career, experienced one of their strongest moments ever.

Says bassist Chris Von Rohr: “It was a magical day for us! From the first song on we felt that the feeling, the connection and the sound were right. Conclusion: a huge hard rock party.”

This past April, KROKUS was forced to postpone its last-ever concerts in USA and Canada due to the coronavirus pandemic that is sweeping the globe. The 13-date trek was originally scheduled to kick off at Canton Hall in Dallas, Texas on September 18 and conclude at Whisky A Go Go in West Hollywood, California on October 10.

Singer Marc Storace says: “We will definitely finish this tour, whenever that may be. KROKUS want to end their career worthily and properly. There is still too much fun and power in there. It’s not over till it’s over.”

Back in September 2018, KROKUS announced that it was going to embark on a farewell tour dubbed “Adios Amigos” before calling it a day. At the time, they said their final show would take place on December 7, 2019 at the Hallenstadion in Zurich, Switzerland. However, in June 2019, KROKUS frontman Marc Storace posted a message on Facebook indicating that the band would play additional concerts beyond the Zurich date.

When KROKUS first announced its decision to embark on a farewell tour, the band explained in a statement: “KROKUS shows have always been special and should stay that way. That’s why we decided to stop when it’s still really good. That’s how the fans should remember us.”

Since 1975, KROKUS has stood for high-quality, honest-to-goodness, hand-made power rock. No other Swiss rock band sells albums and its back catalogue worldwide like KROKUS. The band has sold over 15 million records, toured the world, and received gold and platinum discs in the USA and Canada. The milestones in their rock career are dotted around the world: from Australia and the USA to Mexico, Russia, Japan, and China. KROKUS was the first Swiss band to sell out the legendary Hallenstadion in Zurich and has received a Diamond Disc for selling one million albums in Switzerland alone.

1980 saw the band set out to conquer America, Canada, and England, quickly consolidating its reputation as a strong, no-nonsense live band. Soon they were part of unforgettable headline tours and on the same bill as incredible bands such as AC/DC, VAN HALEN, RUSH, TED NUGENT, JUDAS PRIEST, MOTÖRHEAD and many, many more. These were wild times, full of big adventures, which saw the band not only going gold and platinum in the U.S. and Canada, but also being made honorary citizens of Memphis, Tennessee.

But it hasn’t all been one long high: death, sickness, and internal strife pushed the band to the brink of collapse. The story of KROKUS is like no other. It is full of highs and lows, sell-out stadium concerts and sweaty club gigs. These five musketeers of rock have outlasted trends and survived treacherous U.S. managers, tough splits, bad deals, shady lawyers, drugs, awful fast food, endless bus trips, disco, grunge, grotesque record companies, and double-dealing advisors.

In the course of its legendary career, KROKUS has rocked over 2,000 shows on five continents, countless cities, unique locations, crazy gigs, and loyal fans.

English rock journalist Malcolm Dome quite rightly said: “If you look at the long-term output of this band, KROKUS is clearly one of the best hard rock bands of the last 40 years.” 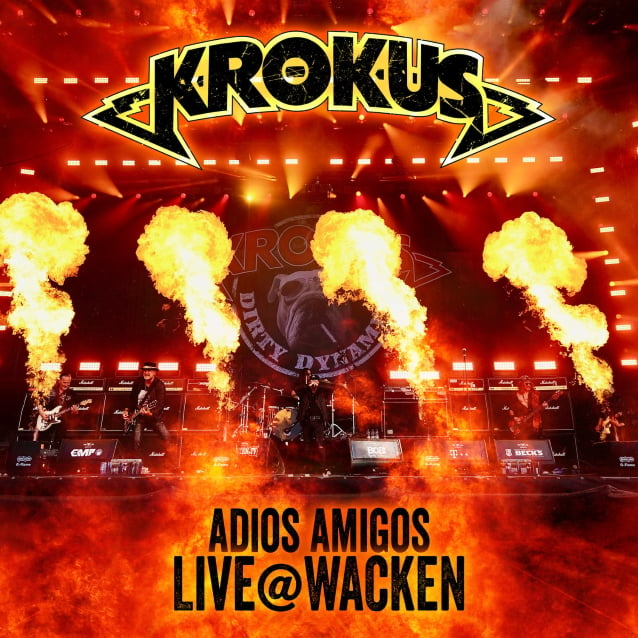