Justine’s Black Threads – “Angels We Have Heard On High”

Boston and Red On Red 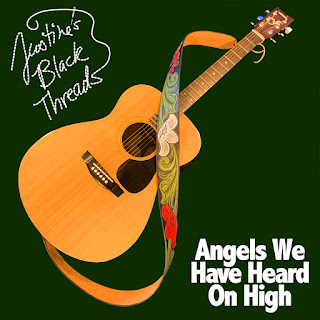 A few days ago, I wrote about the launch of Justine Covault’s brand-new record label Red on Red Records. This label, which has already assembled a roster including the likes of Kid Gulliver and The Neighborhoods, will of course be releasing new music from Covault’s own bands Justine and the Unclean and Justine’s Black Threads. Red on Red just released a pair of holiday singles this past week. One of them is “An Irishman For Christmas” by Berk/Lehane, which I reviewed a few days back. Today I’m reviewing the other – a wonderful interpretation of the revered Christmas carol “Angels We Have Heard On High” performed by Justine’s Black Threads in their patented bluegrass meets rockabilly style. As usual, the Black Threads lineup features Covault on vocals and guitar, Johnny Sciascia (Eilen Jewell, Cranktones, Jittery Jack) on upright bass and harmony vocals, and Jim Scoppa (T.H. and the Wreckage, Stan Martin Band) on guitar. It’s hard to go wrong covering songs from the ’60s, although in this case we’re talking about the 1860s (with the melody dating back an additional 120 years…now that’s old school!). This is a lively and rollicking version that nonetheless holds faithful to the traditional hymn. Covault’s lead vocal is absolutely terrific, and she and the rest of the Black Threads breathe new life into a centuries-old classic. Fans of Covault and/or Christmas music will not want to miss this one!

Published in Boston and Red On Red